Administration Joypurhat Thana was formed in 1918 and it was turned into an upazila in 1984. 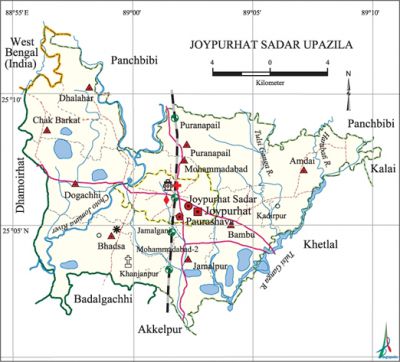 Historical events On 24 February 1952 a public meeting was held in the playground of the government dispensary, with Golam Mowla Chowdhury in the chair, in protest of firing on the procession in Dhaka on 21 February;' student's gathering was also held there. During the period between 1954 and1955 the sugarcane cultivators of Joypurhat revolted against the autocratic activities and mismanagement of the Darshana sugarcane factory authorities. During the war of liberation Joypurhat was under Sector 7. On 23 March the flag of the independent Bangladesh was hoisted at Joypurhat. The Pak army raided Joypurhat on 24 April 1971. They, in collaboration with the Razakars and Al-Badrs made a surprise attack onvillage Barai-Kadirpur (predominantly inhabited by Hindus) of Bambu union on 26 April and brutally killed about 371 people. On 5 October the Pak army killed about 300 innocent people at village Pagla Dewan while they were performing the Jumma prayer. Joypurhat was liberated on 14 December.

Natural resources The Gondoana Coal Mine has been discovered in 1963; limestone was also detected in the upazila in 1964.

Natural disasters The earthquake of 1897 caused damage to a number of buildings; besides the flood of 1922 caused heavy damages to settlements and crops of the upazila.