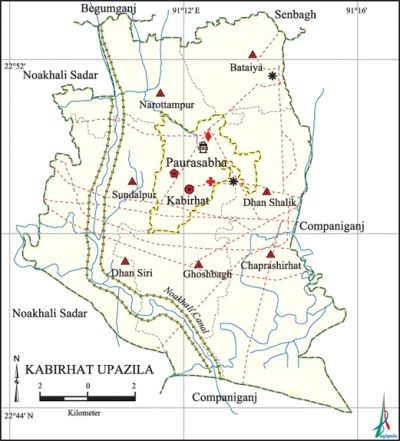 History of the War of Liberation During the war of liberation in 1971, the local razakars established a camp at the Kabirhat High School. On 27 September, the Pak army in collaboration with the razakars conducted heavy torture and plundering in Company Hat area and in village Alipur of Ghoshbagh union; they also set many houses of this area on fire. On 17 October, the freedom fighters launched an attack on the house of razakar Jalil in which Jalil was killed and so were a number of his compatriots.

Marks of the War of Liberation Slaughter place 1 (ditch on the eastern side of the Kabirhat High School).

Hats, bazars and fairs Hats and bazars are 20, most noted of which are Chaprashirhat, Kabirhat, Kalir Hat, Bhuiyan Hat, and Karam Bazar.

Sources of drinking water The presence of arsenic in an intolerable level has been detected in the shallow tube-well water of the upazila.

Natural disasters The cyclones and floods of 12 November 1970 and 29 April 1991 caused heavy damages to settlements, livestock and crops of the upazila.