Kadam Rasul are shrines, venerated in various parts of the Muslim world, where a stone containing the footprint of the Prophets (Sm) is supposedly kept. Traditionally, Muslims have believed that whenever Prophet Muhammad (Sm) trod on a rock his foot had left an imprint. Perhaps pilgrims brought these footprints in stone, being portable, back from Makka. They are kept in shrines known as Kadam Sharif or Kadam Rasul Allah or Kadam Mubarak. 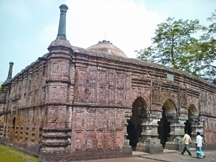 Shrines such as Kadam Rasul have antecedents in both Judaism and Christianity. On the eve of Muslim conquest of Bengal and after, the Dharma worshippers of South-West Bengal comprising the modern Burdwan division used to worship the 'Dharma paduka' (footwear of Dharma). In India Buddhists and Hindus used to worship the sacred footprints of their God and Goddess. We have in the Sanskrit inscriptions such names as Vishnu-padagiri. The early Buddhists reverenced Buddha's footprints ie Buddha-pada. The Muslims always hold the Prophet's relics sacred. The earliest and most famous of the footprint-shrines is the Dome of the Rock in Jerusalem, which marks the place from where the Prophet (Sm) took off on his Night Journey (mir'aj). Before he set off, his foot is supposed to have left a depression on the rock. Other footprints are preserved in Damascus, Cairo and Istambul. 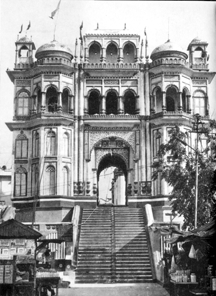 In Bengal the oldest and most famous shrine is in Gaur and was erected by Sultan nusrat shah in 1530-31. According to tradition, the footprint came from the meditation room of the 13th century saint jalaluddin tabrizi of pandua. It was moved to Gaur by Sultan husain shah (1494-1519). Kadam Rasul of Gaur is also important for its place in the development of the Bengali regional style of architecture, which reached its maturity under the Sultanate. Designed like a hut, it is a square room with verandahs on three sides. The central domed room contains a small, carved pedestal of black stone that holds the relic.

The Kadam Sharif in Murshidabad is a building complex, with its oldest mosque built in 1781 by Bashant Ali Khan, the chief eunuch of Mir Zafar. During the time of Nawab sirajuddaula (1756-57), the relic was brought to the complex, but subsequently returned to Gaur by Mir Zafar. However, the enclosure contains a number of family graves of the nawabs, a guesthouse and some other structural remains. The Kadam Sharif is roofed over by three domes, which are ribbed and bulbous in appearance. Four octagonal corner towers are there. The eastern wall of the mosque contains three doorways. The qibla wall inside contains three cusped mihrabs, of which the central one is larger then the other two. Eight pieces of stone inscriptions are found affixed on the southern wall of the room. These Arabic-Persian inscriptions contain verses from the Quran and were brought from the ruins of Gaur and Pandua.

In Bangladesh the best known Kadam Rasul is that of Nabiganj, on the eastern bank of the River Lakhya, opposite Narayanganj. According to Mirza Nathan's baharistan-i-ghaibi, written during the early seventeenth century, this footprint was purchased from Arab merchants by masum khan kabuli, an Afghan chief who had rebelled against emperor akbar. At the time a fortress built on raised ground marked the site.

Inside it a shrine was erected in 1191 AH/1777-78 AD by Ghulam Nabi, a landlord of Dhaka. It is a single-domed structure with a verandah in front. In the middle of the chamber is the altar of the relic, which is usually kept in a metal dish submerged in rose water. The shallow imprint, which measures 2410cm, is cut in the shape of a foot; circular dents just below the upper edge indicate the toes. Its importance can be seen from the two-storied monumental gateway built in 1220 AH/1805-6 AD by Ghulam Muhammad, son of Ghulam Nabi.

The Mughal administrator Yasin Khan built another Kadam Rasul in 1719 in Chittagong. It has a mosque in the center, with two rooms on either side; one houses the footprint of the Prophet (Sm), and the other that of Abdul Qadir Gilani, a 12th century saint of Baghdad. The entire complex contains a mosque, a madrasa and graveyard. It is known as kadam mubarak.

There is another Kadam Rasul in Bagicha Hat within Chandanaish upazila of Chittagong district. [Perween Hasan]