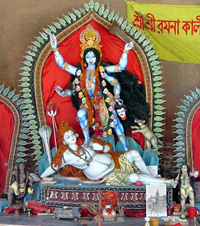 Kali Puja' Hindu religious festival, particularly of the Shakta community. Kali is the first of the ten female energies of shiva (the third god of the Hindu Triad). Different puranas give details of Kali. Kali has many aspects, known variously as Daksin, Siddha, Guhya, Bhadra, Shmashan, Raksa and Mahakali. As Daksinakalika, Kali appears in her most dreadful aspect and is the most widely worshipped. In this aspect, she is shown as dark, four-armed and wearing a string of human heads with blood still dripping from them. She is three-eyed, with one eye in the centre of her forehead. She stands on the chest of Shiva and is encircled by her worshippers.

According to legend, Kali was born from the body of Bhagavati. The gods had been defeated by the demons. In answer to their prayers, the goddess Kausiki appeared from the body of Bhagavati. Kausiki assumed a dark appearance and was named Kali (dark) or Kalika. She then slaughtered the two demons Shumbha and Nishumbha. Kali is known as Chamunda, because she also killed two of the followers of demons, Chanda and Munda.

Kali is a non-Aryan goddess. While most deities are worshipped during the day, Kali puja takes place at night. It is believed that this night worship originated in the secret rites of non-Aryans. With the passage of time, Kali joined the Aryan pantheon.

Shaktas worship Kali as the original power. It is said that Krishnananda Agamvagish (c 15th-16th centuries) introduced the worship of Daksinkalika in Bengal. During the time of Raja krishnachandra roy of nadia (1710-1783), the worship of Kali was well established in Bengal. Kali worship is first mentioned in Shyamasaparyabidhi, written by Kashinath in 1777.

Kali is worshipped daily, but there are special pujas during Dipamvita (the new moon of Kartik), Maghi Krsvachaturdashi (the fourteenth day of the moon during Magh), Krsnachaturdashi (the dark fortnight) in Jyaistha etc. The goddess as worshipped in Magh and Jyaistha is named Ratanti and Phalaharini respectively. Kali puja is also held when asking for a special boon. In rural areas, many people arrange Kali puja jointly during epidemics. Dipamvita Kali puja, known as Diwali in North India, is a joyous celebration of lights.

Usually he-goats, sheep or buffaloes are sacrificed during Kali puja. According to Vishvasaratantra, Guhya Kali enjoys eating iguana meat. According to popular belief dacoits sacrifice human beings during Kali puja. Brahmayamalatantra refers to 'Kalika Bangadesh', suggesting that in Bengal, the goddess is worshipped as Kalika or Kali. The Kali of Kalighat, Kolkata, is famous. There are also a number of Kali temples in dhaka and other parts of Bangladesh. [Suresh Chandra Banerjee]