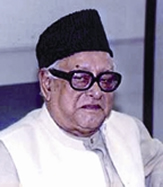 Khaeruddin, Khwaja (1921-1993) politician. He was born on 4 July 1921 in the Nawab family of Dhaka. His father was Syed Khwaja Alauddin and mother Shahjadi Begum. Khwaja Khaeruddin had his early education in Government Muslim High School in Dhaka. He obtained his graduation from Dhaka University in 1943.

He joined the Council Muslim League led by khwaja nazimuddin and was elected a member of the Provincial Assembly in 1965.

Khwaja Khaeruddin was elected a member of the East Pakistan Provincial Assembly in 1968 and was elected as its chief whip. During the mass movement (1969) he tried to unify the three factions of the Muslim League. He contested in the Provincial Assembly elections in 1970 and was unsuccessful. During the war of liberation in 1971 Khwaja Khaeruddin was the convenor of the Peace Committee. After the liberation of Bangladesh he left for Pakistan and was elected vice president of the Muslim League there.