Khwaja Ambar's Mosque is located in the [Karwan Bazar|karwan bazar]] area of Dhaka city on the eastern side of Mymensingh Road, now named Kazi Nazrul Islam Avenue, which was formerly the Mughal Trunk Road built by Subahdar mir jumla, through which Mughal cavalry travelled towards the northeastern frontier. The building has undergone a series of extension and repair works. In the 1960s the mosque was thoroughly repaired and a three-domed verandah was added on the east. Multi-storeyed extensions in the east have been made in the early 1980s, giving the building a modern look. 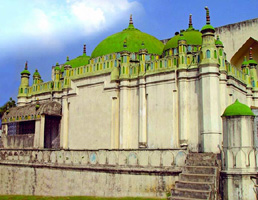 The mosque has retained two inscriptions - one over the central mihrab contains a verse from the Holy Quran and the other over the central doorway records the erection of a mosque, a well and a bridge in 1680 by Khwaja Ambar, the head eunuch of Subahdar shaista khan.

The three-domed mosque occupies the western half of a twelve-foot high (3.66m) platform, which is faced with a row of blind merlons, and is emphasised with massive octagonal towers on the angles, which rise a little above the platform and are topped by small cupolas. A flight of steps on the east leads up to an arched gateway with a stone doorframe. On the right hand side of the stairway there was a well excavated by Khwaja Ambar, which is now closed with earth filling. To the north of the platform is the tomb of Khwaja Ambar, originally a lone sarcophagus but now covered with a brick structure.

The mosque is oblong in plan, 13.41m by 6.71m on the outside. The octagonal towers, which strengthen the four exterior angles of the building, are extended beyond the horizontal parapet. It has five arched doorways - three in the east and one each on south and north sides. The large central doorway and its projected fronton bounded by ornamental turrets are completely made of black basalt. The remaining four doorways also have flanking ornamental turrets and their arched frames are made of black basalt. Corresponding to the three eastern archways there are three semi-octagonal mihrabs inside the qibla wall. The central mihrab, bigger than the others, is projected outside, and has the usual flanking ornamental turrets. The central mihrab with its enclosing rectangular frame is entirely made of black basalt, while only the arches of the side mihrabs are of stone. The three-stepped pulpit to the north of the central mihrab is also of stone.

The two east-west wide arches on engaged brick pillars divide the interior of the mosque into three bays - the central one is 4.27m square. Over the roof there are three slightly bulbous domes on octagonal drums, the central one being larger than its flanking counterparts. Crowned with lotus and kalasa finials, the domes are supported below by the same system as in the lalbagh fort mosque.

Due to the ravages of time and subsequent repair works the decorations of the mosque have mostly disappeared. The walls, which were originally embellished with panels, have been made plain with cement plaster. All the corner towers and flanking turrets, which have kalasa bases, are topped by solid kiosks and ribbed cupolas. The octagonal drums and the parapets are enriched with friezes of blind merlons. The apex of the central dome was marked on the inside with a large medallion, but is now bare. The central black basalt mihrab has a beautiful multi-cusped arch on semi-octagonal pilasters divided into sections by slightly raised bands. The spandrels of the arch are prominently embossed with rosettes, carved in high relief. Above the rectangular frame of the central mihrab there is a boldly projected band, which is topped over by a row of blind merlons. The sunken space between this projected band and the rectangular frame is chiselled with spiral scrolls in shallow relief.

A noteworthy aspect of the building is the use of black basalt stone in the doorways, mihrabs and the pulpit. The stones are possibly from the Rajmahal hills. One more important feature of the mosque, hitherto not seen in Bengal, is the use of bordering turrets flanking the projected fronton of the doorways in the eastern facade. From now onwards this particular device appeared in almost all the Mughal mosques of Bengal. [MA Bari]