Laldighi a historical place in Chittagong city, situated near the Lalkuthi (headquarters of the Metropolitan Police) and Lalghar (Jail). It was converted into a dighi (large pond) during the initial stage of British rule. Since then, the place came to be known as Laldighi. A few structures and fields were built around the Laldighi later on. Fairs were also organised on the bank of this large pond. The naming of Laldighi is certainly linked to the symbol of the police during British rule, which was lal or red.

The pucca ghat on the western bank of Laldighi is known as Ricket Ghat after the name of the then commissioner of Chittagong.

Previously, the entire flat area between the bottom of the hill housing the headquarters of Chittagong Metropolitan Police and the bottom of the hill located on the western side was known as the Municipal Maidan (ground). The Municipal Maidan was bifurcated into two parts when a new road from the north to the south was constructed during the second half of the 19th century. The eastern half was converted into a playground for the common people. After the establishment of Muslim High School, it became known as the playground of Muslim High School. Now, this field is known as Laldighir Maidan. Various public meetings and gatherings take place on this ground. National and local level meetings of various political parties also take place here. 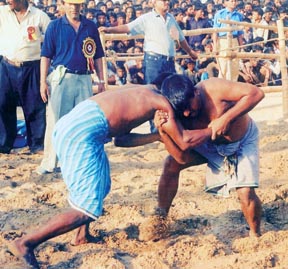 Bolikhela  is a kind of wrestling. In the local dialect of Chittagong, the wrestlers are called Boli or strong men. The boli competition is arranged in the Bengali months of Chaitra, Boishakh or Jaishtha. The annual wrestling competition is now the most popular event of Chittagong, which takes place on 12 Boishakh, according to the Bangla calendar, in the field of Laldighi. A Boli wins the competition when he can throw his rival on the ground and press his back against the ground by applying techniques and force, within rules of the game. A businessman and social worker Abdul Jabbar Sowdagar introduced the Bolikhela on Laldighi ground in 1909. This wrestling competition is therefore known as Jabbarer Bolikhela.

A fair lasting for 4-5 days sits around the streets of Laldighi on the occasion of Bolikhela or wrestling competition. The sellers sit in shops under the open sky or a small cover atop with an array of goods. The items include various cottage industry products, toys for children, plastic dolls of different sizes, flute, masks, crafts for household decoration, household utensils made of metal, clay dolls, flowers and flower-vases, essential items made of iron, wood, bamboo, cane and clay, chopper made of iron, knife, large knife, spade, mortar and pestle, baking pan, cooking tool, frying pan for cooking cakes, ornamented containers and different kinds of dolls. The handicrafts sold include reticulate bag made of jute strings, swings, bags, table-mat, furniture items including chairs and tables made of cane. Traditional food items include gaja, moa, tiler moa, chini-matha, boot, murhi, batasha, khoi, jilapi, sweets, seasonal fruits like melon, water-melon etc. and dried fish of various categories. Side by side, facilities like merry-go-round, variety show, rotating wheel, circus and other entertainments that go with fairs are also on offer. A large number of people come from distant places to attend the fair.

A park located on the eastern, southern and western sides adjacent to the mosque is known as Laldighi Park. It is covered with different kinds of trees and flowers. There are rows of willow and deodar trees besides its wall. The park is open from 6 to 8 in the morning and 3 to 7 in the evening.

The Laldighi Maidan is playing an important role in national politics. The political meetings, which take place at the Maidan carry national importance. The business centres of Chittagong have also proliferated around it. Banks, insurance companies and hotels have been built on the eastern and northern sides. Buses ply from the bank of the dighi on different routes. Thousands of people throng the area every day. The bustling Laldighi area has developed into a vital centre of politics, economy and culture of Chittagong. [Muhammad Abdul Baten]