Magistrate precursor of modern magistrates are the amils and faujdars of the pre-British period. The faujdari or magisterial powers of the nawab was formally abolished in 1793. But the post of the magistrate of the British brand was created from 1772 with limited powers within the diwani administration. The district collector was also the magistrate up to 1793. 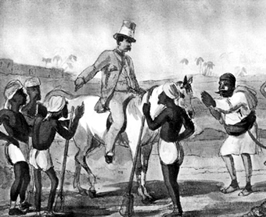 A Magistrate in field visit

Magistrates are either stipendiary or honorary judges administering criminal justice in petty and less grave offences. They take cognizance of offences either on written complainant by an aggrieved person or on police report or on their own knowledge and information about commission of offences. Police can arrest an offender and investigate into a cognizable offence without any warrant of arrest from or order of investigation by the magistrate, but cannot do so in case of a non-cognizable offence. Grave offences which cannot be tried by the magistrates are sent to the court of session or such other court or tribunal for trial.