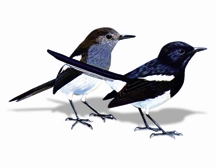 Magpie-robin (doel) black-and-white bulbul-sized, long-tailed bird, Copsychus saularis, of the family Muscicapidae, order Passeriformes. The bird has been designated as the national bird of Bangladesh. The upper part of the male is glossy blue-black, its wings are blackish brown with a prominent long white patch; throat and breast are blue-black; the rest of its underparts are white; and the tail is black with white outer rectrices. Black portions are replaced by brown and slaty grey in the female. They are found solitary or in pairs; feed largely on grounds, and are usually not afraid of human habitations.

The bird becomes quiet during the non-breeding season, but during the breeding season the male indulges in awkward puffing out of chest, pointing bill stiffly skyward, and strutting and posturing in front of rivals. The male vigorously defends his territory during the breeding season. It sings with its wings partly drooping and tail depressed. Its song is a spirited, clear, rather thin and varied whistling, and is divided in short phrases repeated over and over again, occasionally interlarded with mimicry of calls of other birds. The bird feeds on a variety of insects, snails, earthworms, centipedes, small lizards, and some vegetable matter. It breeds during February-July. The peak breeding season is in April and May. [Md Nazrul Haque]