Mahasthabir, Sadhanananda (1920-2012) a Venerable Buddhist spiritual leader, popularly known as Bana Bhante, a monk who was in meditation in the deep forests, was born on 8 January 1920 in the Moghban Union of the Sador Upazilla in rangamati. Sadhanananda was his given name, his original name being Rathindra Chakma.' 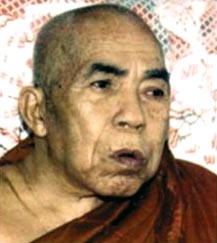 Rathindra began his early education in a local primary school, but for some reason or other could not pursue further studies beyond the primary level. Though he left the school perhaps to assist his parents in the household work, he never lost interest in reading books, in particular books on Buddhism. In 1943 when he was 23, he suffered a setback when his father Haru Mohan passed away. Being the eldest of the six siblings, Rathindra had to take the burden of the family. He is said to have engaged himself in a petty business like buying silk from the Rangamati Bazar and selling it to the womenfolk in different villages of his locality. A turning point came in his life when he met some Mr. Gajendra Lal Barua from Chittagong, while working in a shopping place at Rangamati Bazar.

Having been admitted to the holy monastic life, Rathindra was very keen to strictly follow the rules of the Buddhist Vinaya, but many of his fellow Sramanas at the Vihara were found to be violating them. In search of a better and suitable place for a disciplined Sramana's life Rathindra then left Chittagong and returned to his village home, and went into meditations in the deep forests at a place called Dhanpata. Rathindra used to come out of his meditation place only once a day in the morning to collect alms, and the rest of the day and night he was found to be absorbed in profound mediation without fear and care of hot and cold, rains or wild animals. The local people were overwhelmed to see this and then constructed for him a hut at the foothills of the forest. When in 1960 this place was submerged at the construction of a Dam at Kaptai, Rathindra moved to Boyalkhali in Khagrachari and continued with his meditation in the deep forests in the same way. At Boyalkhali also the local people constructed a hut for him in the forest. On 27 June 1961 he was made a Bhikshu (Monk) at the Boyalkhali Rajvihara and came to be known as Sadhanananda Bhikshu. After having spent a period of twenty years as a monk he was then elevated to the position of Mahasthabir in an assembly of the monks at the Rajbana Vihara at Rangamati.

Sadhanananda is said to have lived in Boyalkhali for a period of ten years before moving to Longadu in the district of Rangamati in 1970. At Longadu he settled at a place called Tintilla in the deep forests. It is from here that his name and fame as a distinguished monk, his mode of life and meditation in the deep forests, his religious sermons and depth of knowledge in Buddhism spread as a legend all over Chittagong Hill Tracts as well as in the country and abroad. From Sadhanananda more popularly and respectfully he came to be known as Bana Bhante. All this shows his great contributions to the development of Buddhism in Chittagong Hill Tracts.

In 1976 Bana Bhante was brought to Rangamati from Longadu and was given to settle finally at the Rajban Vihara at the personal interest and initiative of the Chakma Raja and the royal family. Internationally known and reputed, Bana Bhante generated so much love and respects that every day hundreds of people of all ages and religions used to visit him for prayer and blessings. Bana Bhante is believed to have reached the state of an arhat, one who has extinguished all defilements and afflictions and never to reappear in future. He passed away (mahaparinirvana) on 30 January 2012. [Niru Kumar Chakma]