Mahasthan Mosque a single-domed square Mughal mosque, situated in the southeastern corner of mahasthangarh. It is locally known as Mahasthan mosque or Mahasthangarh mosque. A Persian inscription engraved on a black-stone tablet set over the entrance of the mosque records its construction by one Khodadil in 1130 AH/1718 AD, that is, during the reign of the Mughal emperor farrukh siyar (1717-1727 AD) Originally, the mosque was a single domed small square structure (externally 7m x 7m) with three mihrabs on the western inner wall and three corresponding doorways on the eastern facade wall. 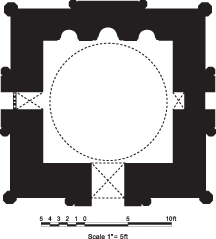 The northern and southern walls contained one entrance each. The arches of the doorways and mihrab-niches are variegated with multi-cusps. The central mihrab and the corresponding central doorway are larger than the side ones and framed within rectangular panels. Both the central doorway on the facade and the central mihrab projection on the outer face of the western wall show ornamental flanking minarets. The mosque has four octagonal corner towers at its outer corners.

The brick-built mosque was plastered. Its arch spandrels were decorated sparsely with floral designs in plaster. The dome rested on drums carried on sidewalls and squinches that have no pillar support. The low horizontal parapets and drum of the dome are decorated with blind merlons. The top of the parapet is relieved with small glazed terracotta pinnacles. The dome is also crowned by similar glazed terracotta finial. The small 18th century mosque is now a big Jami Mosque, extended with pillared hypostyle sheds on all sides except the west. It is whitewashed with lime over thick plaster' [Md Ayoub Khan]