Mangrove is such a vast wetland which is, by and large, inundated by ebb and flow. Mangrove forest is brackish plain sediment swept by ebb and flow. The mangrove eco-system is a combination of tropical and subtropical inter-tidal habitat between latitudes. This inter-tidal habitat is composed of co-dependent objects of various levels. For instance, water flow, silt or alluvium, nutrient substances, biological objects and animals etc.

The mangrove forest is surmounted by 1,81,000 square kilometers of area of the world. However, the recent survey suggests that the area of this forest has been declined to 1,50,000 square kilometers. The costal habitat of the entire world is heavily populated. Massive deforestation, fishing in the mangrove forest and for the alternative usage of coastland has endangered the forest. For heavy dependence on this forest land, the area has been declined by 60-80% or more from what was found three decades ago. Extreme population pressure and activities of the people are accountable to such deforestation. Since 'Mangrove' is composed of inter-tidal habitat, marine, costal, upstream and is related to the interaction with costal environment and with its effect, 'mangrove' assists animals to live in trees and marine and sweet water of different layers. The diversity of mangrove generally means a society consisted of trees, animals as well as various types of anonymous micro-organism and insects. 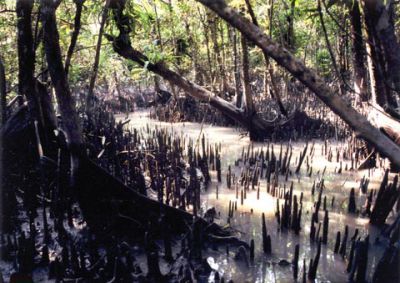 In terms of mangrove management, the significance of biodiversity of mangrove forest includes to the casual habitation of many species at any stage of their life time. Since mangrove is based on vast configuration of land, weather and climatic reality as well as on the situation of water and soil, there is of diversity in this eco-system. A close and pleasant cultural co-existence between humankind and mangrove forest in various countries are evident. Simultaneously, the arrangements of forests in the eco-system, their' production as well as functions are extremely changeable too.

Mangrove forest is a natural and high reproductive eco-system, which may facilitate procurement of valuable goods and service for the people of the costal areas. In this eco-system there are trees, plants, shrubs, a few kinds of palm and creepers. According to the World Conservation Union (IUCN), there are 61 species of Mangrove in this world, among them, most belonged to Rhizophoraceae, Sonneratiaceae, Avicenniaceae family. Mangroves spread in the ebb and tide areas through high and low tides with seeds and Propagules. The circumferences of ebb and flow as well as topography accelerate the horizontal expansion of the Mangrove. The density of salinity in the water of Mangrove Forest is changed by ebb and flow. [Jahangir Alam and Istiak Uddin Ahmed]