Mankalir Bhita Mosque Superposed on the nondescript habitation remains of the early historical period at the extensive citadel remains of ancient pundranagara (present mahasthan in Bogra district), the vestige of a 15 domed pre-Mughal Jami mosque, bearing some unusual architectural features, was exposed in regular excavation during the winter of 1965-66. Oblong in ground plan, the derelict remains of this brick mosque, surviving to a height of about 1.5m from the surrounding ground, measure 28.4m ' 16m with 1.5m thick walls. Its western chamber is divided into 5 aisles, separated by two rows of rectangular brick pillars and 3 bays. It seems, therefore, that originally the mosque was roofed over with 15 squat domes 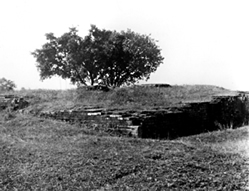 The inner western wall accommodates five semi-circular recessed mihrabs, the eastern wall is provided with five entrances. Remains of beautiful terracotta relief and brick carving, characteristic of the sultanate period were noticed during the operation. The patterns of ornamentation mainly consisted of floreate, geometric, chain, stepped pyramid, lotus-petal and rosette.

A mimbar or a pulpit with steps near the central mihrab on north, measuring 1.8m ' 1.7m was found along with a number of curious short masonry platforms within the prayer hall. One of these, located close to the central mihrab, was enclosed within a wall with a 1.5m wide entrance, conspicuously isolating it from the rest of the sanctuary. This probably might have originally been reserved for some high officials connected with the administration of the area. The other unfamiliar features of the mosque are the existence of three raised short platforms within the prayer chamber, about 0.25 m higher than the general level of the floor, the purpose of which is not clear. There is a 7.8m wide open courtyard on the east.

The mosque suffered more than one repair and renovation work in course of which the floor level was raised and the original octagonal pillars, supporting the domes, were reinforced by encasing them in additional brick work, which changed them into massive rectangular shape. [Nazimuddin Ahmed]