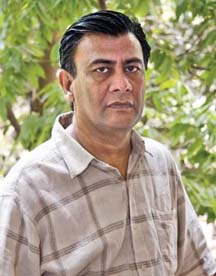 Masud, Tareque (1956-2011) a noted filmmaker of Bangladesh, was born on 6 December 1956 in Nurpur Village under Bhanga upazila of Faridpur district. He received his early education from madrasah. After the independence, he switched over to general education and obtained BA (Hons) and MA in the Department of History from the university of dhaka. His involvement in politics and studies of art, culture and philosophy stepped up his intellectual level during his university life. Tareque Masud was an active member of Film Society Movement. He appeared as an off track filmmaker and established himself as a leading director of that trend by the mid-eighties. He spent about seven years with one of the outstanding painters, SM sultan to picturise a documentary film on his life Adamsurat (1989) and the long period of Sultan's company enriched Tareque's cultural outlook and political philosophy.

Tareque Masud had earned a massive fame with the release of his documentary film on the war of liberation Muktir Gaan (1975), based on newsreels of 1971. He discovered the footages on the Bangladesh freedom struggle, shot in 1971 by American film director Liang Levin during his short stay in the United States. He, alongwith his American wife Katharine Masud, collected more film footages on the war of liberation of Bangladesh from all over the world and jointly produced and directed the historic documentary film Muktir Gaan.

The maiden venture was so popular that it changed both of their lives radically. The documentary is regarded as one of the most authentic documentary evidences of the liberation war after the top one, Stop Genocide by veteran filmmaker zahir raihan. Muktir Gaan (Songs of Freedom) had earned special commendation from the Film South Asia in 1997. It was so popular that beside regular shows in cinemas, its open-air projection was very frequent. People enjoyed and liked the movie very much and this unprecedented popularity inspired Tareque Masud to make another documentary in video format on the reaction of audience entitled Muktir Katha (The Tales of Freedom) in 1999. A new version of sentiment regarding the war of liberation, which was totally different from the traditional but strong middle class values and views, was expressed in this film.

Muktir Gaan established Tareque Masud as a popular filmmaker in the country. But his first full-length feature film Matir Mayna (The Clay Bird) released in 2002 brought global reputation for him. The film bagged the best critic award in the Cannes Film Festival in 2002 and was turned into the most globally discussed film ever produced in Bangladesh. It was the first Bangladeshi film nominated for Oscar award. The film, a sort of autobiograhy of the director himself was made in the context of the liberation war of Bangladesh. Various incidents of the war of liberation, the role of Islamist fundamentalists who collaborated the Pakistan army in staging atrocities and genocide in Bangladesh were depicted in the movie beside the traditional cultural elements and philosophy of Bengal from the point of view of its central character, a boy studying in a madrasah. The Clay Bird was released commercially in the cinema chains of Europe and America and its DVD was also published for global consumption.

Some other remarkable films of Tareque Masud are Antarjatra (2006), Narasundar (2009) and Runway (2010). The story of Antarjatra, a feature film was based on the emotional quest of non-resident Bangladeshis living in the UK for redefining their self-identity. Finally the characters of the film returned back home. Narasundar (Barbar), a short film, narrated the story of a freedom fighter, who was chased by the Pakistani army and their collaborators (mainly non-Bengalis and Muslim fundamentalists) in a market place during the war. But a non-Bengali barbar, working in a shop there gave him shelter and saved his life. Runway depicted many contemporary issues of Bangladesh specially the emergence of terrorism in 2004-2005.

National self-identity, traditional and folk culture and rituals are the contents of Tareque Masud's films. The war of liberation was the theme of some of his films. He was making another film on the partition of India entitled Kagajer Ful (The Paper Flower) before his death. Tareque Masud and the cinematographer of his new film ashfaque munier were killed in a tragic road accident on 13 August 2011 in Ghior on their way back to Dhaka from a shooting spot of Manikganj.

The Filmology of Tareque Masud includes some significant movies. These are the first video film of Bangladesh Sonar Beri (the Golden Chain, 1985), the first animation picture Unison (1994) and the first digital movie Antarjatra (2006). His wife, Catherine Masud worked as Co-director and editor in some of the films directed by Tareque Masud. Tareque was the maker of 16 films- short, feature, documentary and animation. [Fahmidul Haq]