Mirzapur Jami Mosque is situated in Mirzapur village under Atoari thana in Panchagarh district, at a distance of about 6km from Atoari on the Atoari - Panchagarh road. A Persian inscription on the eastern wall of the mosque records its repair and renovation by one Shaikh Malikuddin in 1252 BS (1831 AD), but no one knows its date of construction. Recently the mosque has undergone thorough renovation by the Department of Archaeology, Bangladesh. There are two old graves to the south of the mosque and to its northeastern corner stands an old well. 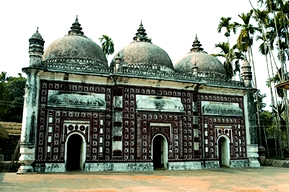 The three domed mosque has an open courtyard (17m x 14m) on its east, with boundary walls all around. The courtyard can be entered through a gateway-room in the middle of the eastern side. The room, which measures externally 4.12m x 2.12m with 0.60m thick walls, is covered over with a chau-chala roof.

The mosque is rectangular (externally 13m x 5.40m) with three entrance archways on the east and there are three mihrabs inside on the west, in alignment with the entrances. The central entrance and the central mihrab are larger than the flanking ones, which are of same size and height. There is an arched window in the middle of both the south and north walls. There are four corner towers in the outer corners of the mosque. The domes are placed on drums and in the phase of transition for the domes squinches along with pendentives have been used. The cornice is straight.

The walls are plastered with panel decoration outside; terracotta plaques having floral and creeper motifs are fixed inside the panels. The three eastern arched entrances have projected half-canopy like covering on the top. The mihrab projection in the middle of the western wall has similar covering. The southern and northern arched windows also show do- chala eaves on top. The walls outside are now whitewashed and the terracotta plaques are painted red creating a very colourful exterior. [Sania Sitara]