Mirzapur Upazila (tangail district) area 373.89 sq km, located in between 24°01' and 24°13' north latitudes and in between 89°58' and 90°15' east longitudes. It is bounded by sakhipur and basail upazilas on the north, kaliakair and dhamrai upazilas on the south, Kaliakair upazila on the east, delduar and nagarpur upazilas on the west.

Administration Mirzapur Thana, now an upazila, was formed in 1913. 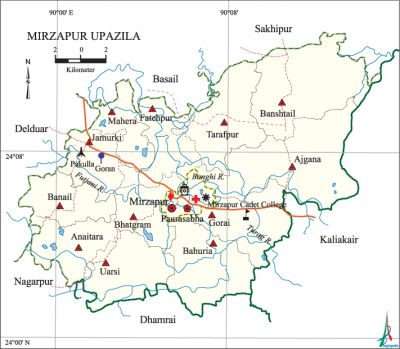 History of the War of Liberation A battle was fought between the freedom fighters and the Pak army on 3 April 1971 at Goran Satiachara in which 33 freedom fighters were killed and so were a number of Pak soldiers.

Natural disasters Many people were victims of the famine of 1943. Besides, the flood of 1988 caused heavy damages to settlements, livestock and other properties of the upazila.