Mru, The an indigenous community. They have settlements in different areas of Bandarban district in Chittagong Hill Tracts. They live in Toyin, Mongu, Luloing, Uttarhangarh, Dakshinhangarh, Tankabati, Teker Panchhari, Renikhyang, Pantala, Thankhyang, Sowalok, Tindo, Alikhang and Bhariatali mouza of the district. According to the 1991 census, the Mru population total 222,167. They are also known as Mraw and Murong. Although they have a language of their own, they did not have any alphabets in the past. At present, text-books up to class three have been published in their own language and alphabets.

The Mrus call themselves Marucha. In Mru language, the meaning of Maru is human. A few families give rise to a clan in the Mru society. The names of many Mru clans can be gathered at present. These include: Ngarua, Naichah, Tam-tu-chah, Yamrey, Ngaringchahu Tang, Kanbak, Prenju, Deng and Khau. Marriages between boys and girls belonging to the same clan are forbidden. The ancestral identity of the Mrus is patriarchal. The Mrus usually arrange marriage ceremonies in the dry season, which commensurate with their lifestyle. 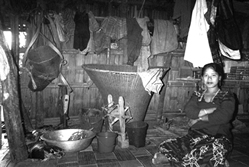 Cutting a hole in the ear is called Raiksharam in Mru language. Everybody irrespective of gender has to prick a hole in the ear. This is done amid a function and feast. The affluent Mru families organise Chhiachhat-ply festival after harvesting crops planted through the jhum cultivation. This festival usually takes place during December-February period. The Mru youths dance around the cow amid the tune of Plong flute by wearing traditional dresses. No priests attend this programme. The Mrus perform puja (idol worship) twice a year. Puja is called khang in Mru dialect. Cakes are baked with newly harvested crops in different neighbourhoods. This festival continues for three days. The three-day long Kerai/Kangnat puja is offered throughout the area in the months of Falgun and Ashar twice a year. Basumati puja is offered if there is any epidemic outbreak of disease. The Mru males wear Nengti (tiny piece of cloth covering private parts). It is passes through the middle of two legs and is bound around the waist. The women's cloth is known as Wanglai.

The width of Wanglai from top to bottom is only six inches; it is embroidered in the middle. The Mru women bind their hair on the left side behind their head. For going to the bazaar, the males wear lungi and shirt while the females wear a piece of cloth on the upper portion of the body. The males keep long hairs and curl those over the forehead. They wear turban on the head. The Mrus like to decorate different parts of their body with colours. Both the boys and girls paint their lips. They like to colour their face, lips and forehead for dancing. The girls wear flowers on their head and ear with strings made of glass-beads around their neck, which is called Kong-ar in Mru dialect. The girls wear a special kind of ornament (Ramcheng) in the ear and bracelet made of metal on the wrist. Both men and women use ring in the ear. The musical instrument which they produce with bamboo pipe is called Plong.  During dances, the males wear red dresses as well as plumes and turbans decorated with glass-beads on the head; the females decorate themselves with flowers, glass-beads and coins. 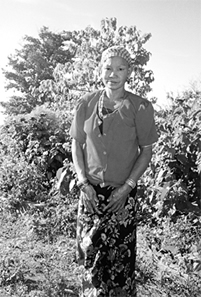 The Mru society is patriarchal. The father is the head of family, but the girls play an authoritarian role in society. The sons become the inheritors of property; a lion's share of property goes to the youngest son. During old age, the parents stay with the youngest son. Both nuclear and joint families are observed in Mru society. They are divided into numerous clans, such as Bhengua (banana tree), Premseng (canna tree), Konglai (wild banana tree), Meizer (jackfruit tree), Ganarugnar (mango tree).It can be inferred from this that the Totemian tree worship tradition is still in vogue in Mru society.

Two kinds of marriages are observed in Mru society, viz. marriage through elopement by boys and girls, and marriage through negotiations. If divorce takes place due to any reason, then the husband gets back all items given to the wife, and the wife brings back all her ornaments to her parental abode. Second marriages are not observed among females, but the males can remarry in case of wife’s death. Polygamy or taking multiple husbands is not observed. Child marriage also takes place rarely. The Mrus burn the dead-bodies or bury them under the ground. Their economic life is mainly dependent on jhum cultivation. 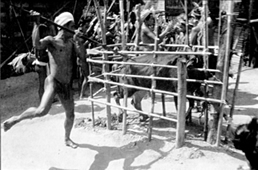 Mru sacrificing an animal during a feast

The Mrus are animists and have three gods Turai, who is the creator of the universe, Sangtun or the god of hills, and Oreng, who is the god of rivers. Before starting anything, they swear in the name of Turai. Sangtung is considered as the symbol of purity and they pray to this hill god with the hope of getting good harvest from jhum cultivation. They worship Oreng for the well being of the village-people and for driving away epidemics and evil forces. They do not believe in the after-life, therefore all their activities revolve around the present. According to the Mrus, death is the ultimate culmination of life. The influence of the Buddhist religion is noticeable in the day-to-day life of the Mrus. A section of the Mru community is adherents of the Christian faith. Many people converted following the introduction of a new religion called Krama by an Mru named Manley. But all kinds of oaths are taken in the names of gun, chopper and tiger. They revere the sun and the moon, but do not worship those. It may be mentioned that the Mrus do not have any priests, any scriptures or any temples. [Abdul Mabud Khan]