Muharram or the 'sacred month' is the first month of the Islamic or Hegira calendar. The Hadith instructs to observe fasting on the 9th and 10th of this month. Fasting on ashura (the 10th of Muharram) was a faraz (obligatory) until fasting in ramadan was made faraz. Both in pre-Islamic times as well as at the time of the Prophet muhammad (Sm), it was haram (forbidden) to be in war in this month. Muslims of the Shiah group observe the first ten days of the month as a period of mourning for the death of Imam Husain (R), the grandson of Hazrat Muhammad (Sm). The tenth day of Muharram is called Ashura.

Imam Husain (R) was killed on this day at the hands of the troops of Yazid, the son of Muawiyah, the Umaiyya caliph. Shiahs take out processions with tazia, the replica of the tomb of Imam Husain (R) and they show their grief by clapping on their chests or flagellating themselves with knives or chains. The mourning continues for forty days till the first ten days of the next month Safar. 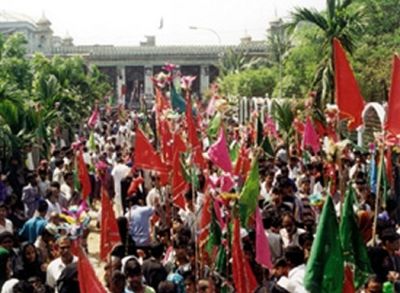 Muharram had been observed since the 10th century. In Bengal also it has been observed for the last few centuries. The centre of observances of Muharram in Dhaka is the husaini dalan Imambara. As mark of mourning, Shiahs dress in black for at least ten days of Muharram. During this time, they refrain from merrymaking, listening to music, or seeing plays or movies. They also do not arrange weddings during this month. Keeping in mind that Imam Husain (R) and his followers suffered from unavailability of water, some Shiahs refrain from eating fish.

During these first ten days of the month, majlis (mourning assemblies), are held at the imambaras, separately for men and women. The story of the martyrdom of Hazrat Husain (R) is told and marsiyas (elegies) are sung or recited in the assemblies. At the end of the service, food is distributed to the people. On the seventh of Muharram, shirni (special offerings) are made and the people pray for Allah's blessings. Food and fruits in large quantities and varieties are distributed on the occasion. Those who pray for Allah's blessings, pick out a food item, and make a manat, or promise, not to eat that food for a year. In case the prayer is deemed accepted, they promise to offer shirni the next year. Along with the shirni, some also offer silver pavja, the model of an open palm with five fingers that represent the five holy figures, the Prophet Muhammad (Sm), his daughter Fatima (R), his son-in-law Ali (R), and his two grandsons Hassan (R) and Husain (R).