Mujibnagar Smriti Saudha (Memorial) At the initial stage of the War of Liberation, the government in exile of the People's Republic of Bangladesh took oath at village Baidyanathtala in Meherpur district on 17 April 1971. Baidyanatala was renamed as mujibnagar after the name of Bangabandhu Sheikh Mujibur Rahman. Later a memorial monument was constructed to commemorate the place of oath.

Immediately after the War of Liberation the Government of Bangladesh took initiative to make Mujibnagar memorable. On 31 August 1973 the government gave an instruction to construct a memorial at Mujibnagar. During the observance of Mujibnagar Day on 17 April 1974, Syed Nazrul Islam, the acting President of the Bangladesh Government in exile during the liberation war, formally inaugurated the project. 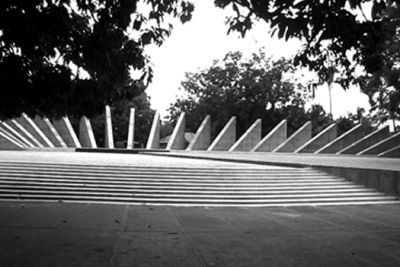 The Mujibnagar Smriti Saudha is the symbol of liberation war and the sacrifice of the Bangalis. It stands on a land measuring 20.10 acres. This monument was erected on twenty three triangular shaped concreted pillars, and appears to be a symbol of the rising sun in its design planned by architect Tanveer Naquib. Twenty three pillars symbolise the twenty three years of Pakistani rule and of the struggle that the Bangalis gradually unfolded during those twenty three years. The altar is built with a height of 3 6 and a diametre of 160. The pillars are standing in a line covering half of the altar. Of the octagonal triangular shaped pillars the height of the first one is 9 and the length is 20. Each of the following pillars has an additional height of 1 and length 9/ from the previous one and thus the 23rd pillar assumes a height of 25 6 with length 25 6. The round shaped altar is divided into three parts of different height from the surface. The height of the first, second and third is 2 6, 3 and 3 6 respectively. The numerous circles on the other part of the altar of 2 6 height symbolise the thirty lac martyrs in the War of Liberation. The other part of the altar of 3 height is covered by numerous pebbles symbolising the unified struggle of seven crore freedom fighter Banglalis. The place where oath was taken by the Mujibnagar Government has been earmarked by a rectangular of red cyramic bricks. The ascending stairs to the altar is of nine steps symbolising the progress of liberation war during the nine months.

A construction farm, 'Everyday Engineering' completed the construction work of the memorial under the supervision of the Directorate of Public Works of the government. President H.M Ershad formally inaugurated the Mujibnagar Smriti Saudha on 17 April 1987. It was transformed into the Mujibnagar Smriti Saudha Complex by annexing the new establishments like a library, a mosque and guest house during 1996-2001. [Mohammad Faiquzzaman]