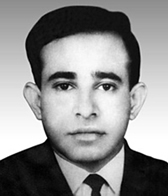 Abdul Muktadir received his early education at the local primary school and Silam Junior High School. He completed his matriculation in 1956 from Raja GC High School, Sylhet, and passed ISc in 1958 from Sylhet Government College. He obtained his BSc (1960) and MSc (1962) degrees in Geology from Dhaka University. In 1967 Abdul Muktadir received his postgraduate diploma in Hydrology from London University. While studying at London University, he also received higher training in Hydrology under the technical assistance programme of the British government.

Returning from London, Abdul Muktadir started his career as a lecturer in Geology at Dhaka University in 1964. But Muktadir suffered martyrdom at the cruel hands of the Pakistani military on the night of 25 March 1971. [Sifatul Quader Chowdhury]