Nalanda Mahavihara a famous seat of Buddhist education and culture, which attained great fame in the seventh century.

The scattered ruins of Nalanda are situated near the village Bargaon, 11 km north of modern Rajgir and 85 km south-east of Patna in Bihar. Though situated outside Bengal's geographical boundary, Nalanda Mahavihara had intimate connection with Bengal. 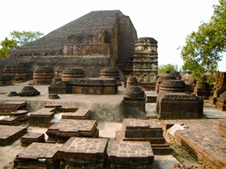 Traditional history takes back the antiquity of Nalanda to the time of Buddha; excavations there, however, have not revealed anything earlier than the Gupta period, the main focus of activity being during the time of the Pala rulers (8th - 12th centuries AD). The assumption that the monasteries of Nalanda were the creation of the Gupta emperors beginning with Kumaragupta I may seem to receive some confirmation from the fact that Fa-hien does not mention the monastic establishments when he visited the place. By the 7th century AD Nalanda had established its reputation as a centre of learning as hiuen-tsang spent here a few years studying.

During his time Nalanda was humming with literary and religious activities presided over by distinguished priests. So great was the celebrity of Nalanda during those days that within 30 years of Hiuen Tsang's departure no less than 11 Chinese and Korean pilgrims, including i-tsing (studied here for ten years, 675-85 AD), are known to have visited the centre. Harsavardhana of Kanauj (606-647 AD) was a great patron of the Nalanda monastery.

The Pala rulers of Bengal continued their patronage to Nalanda. dharmapala made special arrangement for its administration. taranatha mentions that the chief who looked after vikramashila mahavihara, established by Dharmapala, was ordered by the king to look after Nalanda as well. Balaputradeva, a Shailendra king of Suvarnadvipa built a monastery at Nalanda for the residence of Javanese monks, with the permission of devapala, who granted five villages for the maintenance of the monks. The monastery of Nalanda was in those days the seat of international Buddhist culture, and the Pala emperors, as its guardians, held a high position in the Buddhist world. Devapala's interests in the Nalanda monastery and deep devotion to the Buddhist faith are known from the Ghoshrawa inscription. Gopala II, mahipala I and ramapala are known to have taken interest in the affairs of Nalanda. However, it must be said that Nalanda did not receive exclusive patronage from the Pala rulers, as they are known to have founded and extended their patronage to a few more Buddhist establishments.

Identified by Cunningham (ASI, AR, I) on the basis of the bearings given by the Chinese pilgrims, mainly Hiuen Tsang, some early excavations were carried out in 1872. Later from 1915-16 to 1935-36 Archaeological Survey of India carried on excavations under haraprasad shastri and JA Page and laid bare monasteries, temples and other structures. The viharas of Nalanda were of common type. The general plan formed a rectangle bounded by an outer cell with an open veranda. The important feature of the vihara was a collection of smaller monastic blocks arranged in a line on one side with shrines, pavilions, courts, etc on the other, the two being enclosed by walls and thus forming one whole. The temples and monasteries are in two parallel rows, the temple facing east and the monasteries west, the wide space in between sometimes occupied by stray shrines.

Numerous seals and sculptures have been found at Nalanda. The official monastic seals bear as usual the wheel-and-deer insignia and the legend Shri-Nalanda-maha-vihariyarya-bhiksu-sanghasya. Seals belonging to different rulers or officers of territorial units have also been found. Nalanda was an important centre of bronze-casting; over 500 bronzes of Buddha and Buddhist divinities of Tantrayana-Vajrayana, of which Nalanda became the focus in the Pala period, have been recovered from here. The influence of Nalanda bronzes spread, along with Buddhism itself, to South East Asian countries.

The scholars of Nalanda were celebrities in their own right. Both Hiuen Tsang and I-tsing were eloquent in their estimate of the Nalanda professors. When Hiuen Tsang was at Nalanda a Bengali Buddhist monk named shilabhadra, the earliest Bengali Buddhist teacher to achieve this distinction outside Bengal, was its abbot. Hiuen Tsang himself was a student of Shilabhadra. The name of Nalanda is found mentioned in several of the colophons of the later Palas.

That Nalanda continued to be an important seat of learning from the 4th century to the 9th centuries AD cannot be doubted. The clay seals of Vainya Gupta, Budha Gupta, Kumara Gupta, found at Nalanda, are collectively the best testimony regarding its prominence from the 4th to the 7th centuries AD. Though the Gupta monarchs had patronised it and one of them, Shakariditya, according to Hiuen- Tsang, had founded it and though this does not seem to have been really the case, still the most prosperous period of this great institution was from the 6th to the 9th centuries AD. This was due to the unstinted and liberal patronage of the Palas who outshone the Guptas in making rich endowments to this great seat of learning.

Nalanda lost its importance in the 12th century. When Dharmasvamin (early 13th century AD) visited Nalanda, it had lost its past glory and many of its structures had suffered at the hands of the 'Turuskas'. Only two viharas were in a serviceable condition, and he met there a ninety-year-old mahapandita named Rahulashribhadra.

The Buddhist University of Nalanda had close association with Bengal because it was situated in territories that formed an integral part of the Pala kingdom. One of the best learning and cultural centres in ancient times, it was no less glorious for Bengal that its 'sphere of influence' expanded on this centre. At the same time, it can in no way be denied that the cultural and educational sectors of Bengal benefited from this centre. [Aksadul Alam]