Napit (barber) also known as paramaniks, is an occupational Hindu caste traditionally engaged in hair cutting. In olden times, the napit was a social institution. On the occasions of births and marriages of Hindu families, a napit used to perform some rituals.

Muslim families also engaged napits for the ceremonial shaving of the heads of the new-born babies. Napits shave the heads of Hindu males after obsequies. Traditionally, in rural markets, a napit has a fixed shop where people visit to have haircuts, to cut their nails and to have small surgeries done. He was paid for these services either in cash or in kind. In the long past, payment was generally made in kind. The system of exchange between service and kind was called Jajmani. The village people paid him in crops at harvest time in exchange of the services that they received from the napit throughout the year. 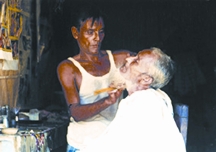 A napit at work

The napits were well known for their cleverness, sense of humour, and penchant for gossiping and story telling. Inter-family and inter-village information was normally obtained through the napits. The village people invariably engaged napits to carry the news of births of male children. And, for the good news that they served, they received gifts.

Many hold the opinion that the first napit of Bengal was the son of a ksatriya father and a shudra mother. Many others say that it was a person engaged by shiva for cutting his wife's nails. Napits are divided into several sub-castes, such as Anarpuria, Bamanbane, Barendra, Radhi, Mahmudabaz, Saptagram, Satgharia, and Khotta. Unlike many other lower castes, napits are not considered as untouchables. Even a brahman can take water from the hand of a napit. Most napits are Vaishnavas. They employ Brahmans as priests. Napits burn their dead bodies and perform shraddha in the orthodox fashion on the thirty-first day of death. Their rules regarding diet are the same as those followed by most respectable Hindus. Vaishnava napits do not eat meat, but as a rule, they eat fish.

Barbers belong to different categories in cities. In urban areas there are saloons for men and women and the workers in these saloons are skilled hands, use modern equipment for hair cutting, and come from all religions. They have higher incomes than their rural counterparts. The urban barbers play no other role than hair cutting and hair dressing and sometimes, messaging the head, neck and hands of customers. Hair dressing and messaging are not in vogue in the rural areas. The institution of napit is now almost extinct. Now any one can take to the profession as a business and leave it any time for other jobs. In older times, massaging was also a job of the napit. Massaging is also there in the saloon, a hair dressing place. But it is more a specialization than a caste job as of the past. [Gofran Faroqi]