Administration Narail district was formed in 1984. Of the three upazilas of the district narail sadar is the largest (381.76 sq km) and lohagara is the smallest (290.83 sq km). Narail Town stands on the bank of the Chitra. 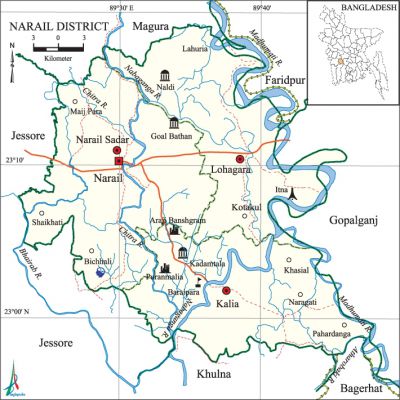 History of the War of Liberation On 26 March 1971, the youths of Narail, under Professor Nur Mohammad Miah captured all arms and ammunitions of Narail Armoury and carried these to Lohagara. On 1 April a group of freedom fighters marched towards Jessore Cantonment to launch attack. On 2 April the freedom fighters raided the Rupganj military camp and, later on killed 60 Pak soldiers at the Narail ferry ghat while fleeing from the camp. On 3 April the Pak army launched an attack on Narail town. A number of establishments were damaged and the Town was virtually vacated due to air raids on Narail town by the Pak army on 6 April. On 13 April the Pak army established their camp at Narail. In early May the Pak army, in collaboration with the local razakars captured school teacher Sheikh Abdus Salam of Kalia Pilot High School from Ramsiddhi and killed him on 13 May in the Jessore Cantonment. On 23 May the Pak army killed 39 innocent people at Itna of Lohagara upazila. They conducted mass killing and plundering including violation of women in the upazila. On 17 July, the Pak army in collaboration with the local razakars captured 8 innocent persons from village Tularampur, took them to Water Development Board Camp and killed all of them. On 7 December the Pak army and razakars killed freedom fighter Mizanur Rahman at village Mahimdia. On 9 December the freedom fighters launched a concerted attack on the Pak military camp in which another freedom fighter Motiar Rahman was killed. On 10 December the freedom fighters attacked the Pak army from all sides and liberated Narail. On 14 December Major muhammad abul manzoor, Commander of Sector 8 of the war of liberation formally hoisted the flag of the Independent Bangladesh at the Dakbangalow of Narail.'

Marks of the War of Liberation Mass grave 2 (at the premises of the Water Development Board of Narail Sadar and at village Itna of Lohagara upazila).

Folk culture Notable folk songs of the district include Jarigan, Kabigan, Kirtan, Haloigan, Bhatiali, Meyeli geet (songs sung by women), etc; besides rhymes, riddle, mantra, proverbs and folk tale are also popular in the district. Folk traditions of the district include inviting rain by putting mud on the body and singing of songs and distribution of sirni (sweet), floating of flowers and leaves on water on the last day of Ashwin (BS) to avoid diseases, distribution of Sirney to protect epidemic of cattle etc. Folk games and sports prevalent in the district are boat race, Chiburi, Kutkut, Kabadi, Echingbiching, Kanamachhi, Ekkadokka, etc.