Administration Naria Thana was formed in 1930 and it was turned into an upazila in 1983. 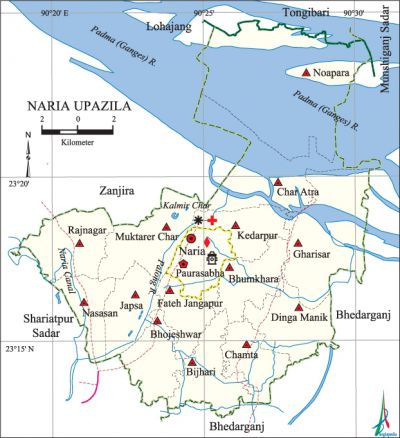 History of the War of Liberation In 1971 many youths of this upazila joined the war of liberation having arms training from India. During this period the freedom fighters raided the Naria Police Station and captured arms and ammunitions. The Pak army sacked and set many settlements of the upazila on fire. Freedom Fighter Abdul Hamid Sardar of Bhojeshwar union of the upazila was killed in an encounter with the Pak army.

Marks of the War of Liberation Martyrs' Memorial 1.

Hats, bazars and fairs Hats and bazars are 22, fairs 8, most noted of which are Bhojeshwar Hat, Gharisar Hat, Mulfatganj Hat, WAPDA Hat.