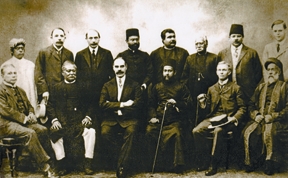 The declaration of the annulment of the 1905 partition of bengal on 12 December 1911 came as a rude shock to the Muslims of Eastern Bengal who saw it as a major setback in their quest for advancement. The Viceroy Lord hardinge perceived the dissatisfaction of the Muslims of Eastern Bengal and paid an official visit to Dhaka to soothe their anguish. A Muslim deputation comprising Nawab Sir salimullah, Nawab Syed Nawab Ali Chowdhury, ak fazlul huq and other Muslim leaders voiced their apprehensions to the Viceroy and implored him to protect their interests in Eastern Bengal. As a compensation for the annulment of the Partition the deputation pressed for the establishment of a University at Dhaka.

The Nathan Committee acted with promptitude and thoroughness, obtaining the advice of 25 special sub-committees, and submitted its report to the government of Bengal in the autumn of 1912. The Committee recommended that the University of Dacca should be a state University maintained by the government and staffed by government officers. The Director of Public Instruction would be the Official Visitor, with full powers to inspect all colleges and departments. This scheme foreshadowed the establishment of a unitary teaching and residential University at Dacca in which the College was to form a unit of the University, combining teaching and residential facilities. The number of students in each college would be restricted to 600 and the scheme provided accommodation for 2899 students studying in seven colleges, the other six being Dacca, Jagannath, Muhammadan, Women's, College for the Well-to-do and Teachers' College. The Muhammadan College was to specialise in Islamic Studies. The scheme recommended special university departments for Science, Engineering, Law and Medicine as well as post-graduate studies in Arts and Sciences.

Another special feature of the Nathan Committee Scheme was the Department of Islamic Studies in the proposed University of Dacca. This department would render university-level instructions to the students of the reformed Madrasas.

The Nathan Committee also had proposals for the existing Engineering and Medical Schools, which were to be raised to the status of Colleges and were to be reconstituted as two departments of the University. Similarly the Eden Girls' School was to be upgraded to a women's college while the Teachers' Training College at Dacca' [Dhaka] would form a constituent part of the University. The inspection of schools and their recognition was to be accorded by the University of Dacca.

In the Convocation and Council, provisions would be made for the representation of Muslims. Finally the Committee suggested that a splendid site of about 450 acres forming part of the Civil Station of the Government of eastern bengal and assam at Ramna would be chosen for the upcoming University campus.

The Nathan Committee Report published in 1913 received its final approval from the Secretary of State in December 1913. The outbreak of the Great War in 1914 and the subsequent financial stringency of the government made the implementation of the report a virtual impossibility. A modified scheme, however, was later approved, both by the government of India and the Secretary of State. [Rachana Chakraborty]