National Flag Like all other nations Bangladesh also follows approved rules as regards size, design, colour of the national flag and manner of hoisting the flag. According to flag rules (1972), the National Flag will be in bottle green and rectangular in size in the proportion of 10:6, with a red circle in the middle. The red circle will have a radius of one-fifth of the length of the flag. 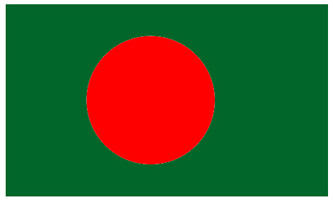 Its centre will be placed on the intersecting point of the perpendicular drawn from the nine-twentieth part of the length of the flag, and the horizontal line drawn through the middle of its width. The green base of the flag will be of Procion Brilliant Green H-2RS 50 parts per 1000. The red circular part will be of Procion Brilliant Orange H-2RS 60 parts per 1000. Depending on the size of the building the flag sizes will be 10´ x 6´; 5´ x 3´; 2½´ x 1½´. The size of the flag for car is 12½” x 7 ½”, and the size of the table flag for bilateral conferences is 10” x 6”. Initially the flag had the map of Bangladesh in the centre, which was withdrawn later. The Mujibnagar Government adopted the pattern of the flag unfurled by the student leaders in the Dhaka University on 2 March 1971.

Occasions to hoist national flag The Bangladesh flag has to be flown on public and private buildings throughout the country and the offices and premises of Bangladesh diplomatic missions and consulates on Independence Day, Victory Day, Eid-e-Milad-un-Nabi, and any other day as may be notified by the government. The National Flag shall be flown at half-mast on the Shaheed Day (21 February) and any other day notified by the government.

Hoisting flag abroad The National Flag shall be flown over Bangladesh diplomatic missions and consular posts in foreign countries in accordance with the custom of the country in which the Bangladesh mission is situated.

Flying the flag on public buildings, official residences, motor cars, etc The Bangladesh Flag shall be flown on all working days on important government buildings and offices, i.e. the President's House, Prime Minister's House, Jatiya Sangsad Building, etc. All ministries and the secretariat building, offices of the high court, courts of district and session judges, offices of the commissioners of divisions, deputy commissioners/ collectors, upazila parishad offices, central and district jails, police stations, customs posts and such other buildings as may be notified by the government from time to time. Bangladesh chancery and embassy residence in a foreign country will also fly National Flag. The flag shall be flown atop the official residences of the President, Prime Minister, Chief Justice of Bangladesh, Speaker and Deputy Speaker of Jatiya Sangsad, cabinet ministers, chief whip, Leader of the Opposition in Sangsad, head of diplomatic missions in foreign countries. All of them are entitled to fly flag on their motor cars. There are detailed rules as to the showing honour to flag and protocol to maintain. [AKM Farooq]