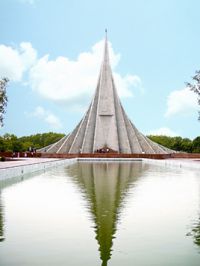 National Martyrs’ Memorial situated at Savar, about 35 km north-west of Dhaka, symbolises the valour and sacrifice of the martyrs who sacrificed their lives for the liberation of Bangladesh.

A national competition was held for the design of the project in June 1978. Among the fifty-seven competitors Architect Syed Moinul Hossain's design proposal was selected. The main monument is composed of seven isosceles triangular planes each varying in size in its height and base. The highest one has the smallest base while the broadest base has the lowest height. The planes are folded at the middle and placed one after another. The highest point of the structure reaches 150 feet. This unique arrangement of the planes has created a structure that seems to change its configuration when viewed from different angles. The architect has used concrete for the monument while all the other structures and pavements of the complex are made of red bricks. Use of different materials has added to the gravity of the monument. 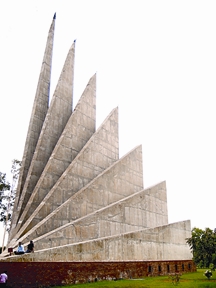 Side view of National Martyrs’ Memorial

The whole complex is spread over an area of 34 hectares (84 acres) which is again wrapped around by a green belt of 10 hectares (24.7 acre). Several mass-graves and a reflection water body are placed in front of the monument. Once one enters the complex through the main gate he or she can see the monument axially but to reach it one has to walk through different ups and downs of pavements and cross an artificial lake by a bridge-all these represent the struggle for independence.

The project was constructed in three phases. The first one, began in 1972, involved in acquiring land and constructing road for the project at a cost of Tk 26 lacs. During the second phase, 1974-1982, Tk 3.77 crores were spent in order to build the mass-graves, helipad, parking space, pavements etc. In the third phase, began in August 1982, the main structure was built apart from the artificial lake, green belt, cafeteria, housing etc. The third phase required Tk 848.65 lacs. The Public Works Department of the Government of Bangladesh supervised the construction of the project. [Md Shahidul Amin and M Zakiul Islam]