Natore Rajbari situated in Natore, a district town about 48 km east of Rajshahi, was the zamindari headquarters of the natore raj. Like most of the feudal palaces in Bangladesh the palace ruins of Natore are approached through a long avenue, fringed on either side with carefully planted rows of bottle palms. 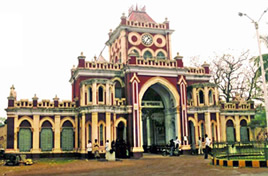 Ramjivan, the real founder of the Raj family, made his headquarters at Natore and built most of the Rajbari complex, the tanks, temples, orchards and flower gardens. Originally Natore was a small settlement under Taraf Kanaikhali in Lashkarpur Pargana.

The present site of the palace complex, occupying an area of 37.20 acres of land, was enclosed within two rings of defensive moats, originally known as Chai Bhangar Beel. Silt and weed-choked tanks, surrounding the derelict ruins of seven surviving detached palace blocks now mark the moats. Subsequently the palace complex was considerably developed and extended by rani bhabani

Of the surviving seven palace blocks only four are in a tolerable state of preservation, occupied by various offices of the district administration and the others have been reduced to amorphous mounds of disintegrating structures. The single storied northern block, now housing the Deputy Commissioner's Office faces a large open lawn to the south. Two other blocks on south and west overlook the lawn and are laid out in the form of English 'U' with the open side to the east.

The main northern block has a frontage of about 30.48m with a prominently projecting porch in the middle and two slightly projecting bays on either end, and relieved with triangular pediments above. The elegant central porch and the veranda in front of the apartments are supported on rows of semi-Corinthian columns and relived above with segmented arches in the classical Roman fashion. This block accommodates 11 spacious apartments flanking the large reception hall in the middle. The lofty ceiling of the central hall (18.29m' 9.14m) rises to a height of 9.14m and is lit by 18 clerestory windows originally fitted with coloured glass. Some of the capitals of the columns contain classical nude female figure.

The western single storied block with about 60.96-m front has also an arched projecting bay in the middle. A strip of veranda with a series of Doric columns reins the entire length of the block. There is a nat-mandap (dancing hall) at the back and beyond that farther west is a Krsna temple. This small family shrine about 15.24 m wide with a 3.05m wide veranda at the back, has a row of double Corinthian columns. Built at right angle to this block is another north-facing single-storied building with about 45.72m frontage. A projected central porch leads to a veranda at the back, behind which are a series of apartments, overlooking a large tank choked with weed. The rear side of this elegant block is decorated with plasterwork. At present the office of the superintendent of police occupies it.

To its southwest corner a couple of precariously surviving buildings overlook the same tank. The smaller of the two presenting a 15.24m frontage with a veranda carried on a series of paired Doric columns, while the larger adjacent block has a 30.48m frontage with a veranda supported on a row of semi-Corinthian columns. Both the buildings are now thickly covered with encroaching thickets and crumbling debris.

However, the main palace block of the chhota-taraf, perched picturesquely on the western bank of the same tank and now occupied by the District Judge's Court, is an imposing edifice. Presenting a 21.34m long facade it has a prominently projecting triple-arched portico. The central part of the building, accommodating a large reception hall, rises above the flanking wings and is crowned by a pyramidal roof with clerestory windows. The parapet of the porch is relieved in plasterwork with friezes of large floral scrolls, intertwining neo-classical sculptures. In addition, there are two short projecting bays on either ends of the building, each decorated with two pairs of Corinthian columns surmounted by triangular gables. There are 15 apartments including the two large halls - one behind the other - with a balcony at the back overlooking a moat. Rear side of the block is also embellished with Ionic capitals, floral motifs and bearded human heads in stucco. [Nazimuddin Ahmed]