Nikli Upazila (kishoreganj district) area 214.40 sq km, located in between 24°15' and 24°27' north latitudes and in between 90°52' and 91°03' east longitudes. It is bounded by karimganj and mithamain upazilas on the north, bajitpur upazila on the south, Mithamain and austagram upazilas on the east, katiadi and Karimganj upazilas on the west.

Administration Nikli Thana was formed in 1981 and it was turned into an upazila on 24 March 1983. 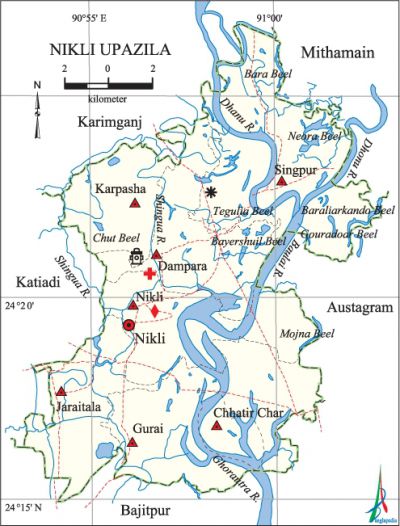 History of the War of Liberation In the middle of July 1971 the Pak army killed about fifty innocent people at Shashan Ghat (cremation centre). On 6 September the Pak soldiers killed 25 innocent people at village Gurai. A number of freedom fighters were killed in an encounter with the Pak army on 19 October. Nikli upazila was liberated on 20 October.

Marks of the War of Liberation Mass killing site 1: at a home-stead behind the Shashan Ghat adjacent to Nikli Bazar.

Hats, bazars and fairs Hats and bazars are 15, fairs 15, most noted of which are Nikli Puratan Bazar, Nikli Natun Bazar, Daspara Bazar, Majlishpur Bazar, Mela near at Gurai Mosque and Paush Samkranti Mela at Saitdhar.

Natural disasters The flood of 1988 caused heavy damages to settlements, crops and other properties of the upazila.