Nilphamari District (rangpur division) area 1580.85 sq km, located in between 25°44' and 26°19' north latitudes and in between 88°44' and 89°12' east longitudes. It is bounded by west bengal state of India on the north, rangpur district on the south, lalmonirhat district on the east, panchagarh and dinajpur districts on the west.

Administration Nilphamari Sub-division was formed in 1875 and it was turned into a district in 1984. Of the six upazilas of the district nilphamari sadar is the largest (373.09 sq km) and saidpur is the smallest (121.68 sq km). 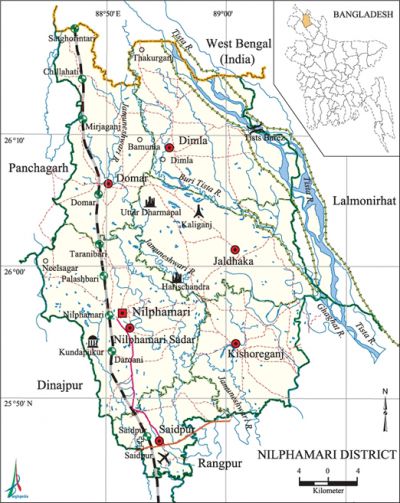 Folk culture Bhawaiya songs are mostly prevalent in the district. These songs are primarily based on traditional stories. Other notable folk songs of the district are Bishari or Manasar song, Hudumdeo song, Jari' song on the occasion of muharram, marriage song or Heroya, Bhasan Jatra, songs of Satya Pir. Various Sari song such as Nayanshari Bostam Baudia, Shital Shori Janakpala, Ambal Shori Pichhal Baudia, Paimal Shori Bhodai Member etc are very popular. The rural people arrange for a folk festival called 'Pasti' within three to six days of the birth of a baby. In addition, other folk traditions and beliefs prevalent in the district include Ashta Mangala, Bhadar Katani, Paush Katani, etc.