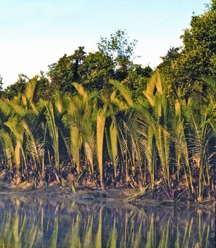 Nipa Palm locally known as golpata, Nypa fruticans, is a member of the family Arecaceae (= Palmae). It is a mangrove species, distributed throughout the mangroves of Asia, Oceania and east coast of Africa. It is a trunkless palm with tall erect leaves (3-9m long). The underground stem is a short horizontal rhizome with massive dense root system.

Nipa generally occurs in the mangroves along the banks of the rivers and streams, and needs regular inundation. In the Sundarbans it grows in slightly and moderately saline zones. People in south-western parts of Bangladesh grow nipa in the agricultural fields to a limited extent for domestic use.

Nipa leaves are quite durable and used for thatching houses. It is an important thatching material in south-western parts of Bangladesh, particularly in the districts of Patuakhali, Bagerhat, Khulna, and Satkhira.

Nipa regenerates naturally in the mangrove. It can also be propagated artificially by planting seedlings along the muddy banks of mangrove forests and also in exposed shorelines. Generally seedlings are raised on nursery beds regularly inundated by tidal water. Usually two months old seedlings attaining height of about 25cm are suitable for planting. Generally leaves are harvested at the age of five and done annually. Harvesting is done once in a year, usually during dry months (October-February). All leaves are harvested except the unopened leaf and the leaf next to it. [M Khairul Alam]