Otter (bhodad/ud/udbidal) any of several semiaquatic mammals of the family Mustelidae, order Carnivora, typically with streamlined bodies, thick tails, short limbs and webbed feet. The ears and nostrils can be closed during swimming. The whiskers on the muzzle are long and touch-sensitive, so assisting the animal in searching for prey underwater. The family also includes weasels, badgers and skunks and has 67 species worldwide. Bangladesh has three species of otters and one species of badger. 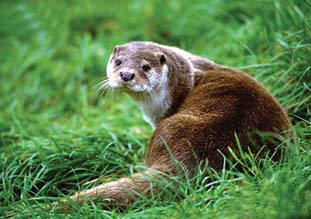 Otters are found on all continents except Australia. They are the most nearly aquatic among the mustelids. They swim with webbed feet, and can travel underwater for about half a kilometre without surfacing for air. They can also travel on land. Their food consists of fish, frogs, crabs and other large aquatic invertebrates, which they sometimes catch by teamwork.

The sea otter of the north Pacific is one of the few tool-using mammals, using stones which it pulls off rocks with its fore feet and crushes with its rounded molar teeth. It uses stones to break open the hard shells. The stone is placed on the chest of the floating otter and used like an anvil. They are social and playful animals; groups have been seen playing 'follow the leader', sliding down mudbanks, apparently for pleasure. In some species adults throw stones in the water, dive in after them and catch them as they sink, seemingly for pleasure. They are intelligent, friendly and inquisitive and, when obtained young, can be trained readily. Fishing with otter is being practiced in the Sundarbans and some other southern and southwestern districts of Bangladesh. Of the 3 species of otters that are found in Bangladesh, one is critically endangered ie facing extremely high risk of extinction and two are endangered.

Oriental Small-clawed Otter Also known as short-clawed otter or Clawless Otter, Aonyx cinerea. It is the smallest otter with rudimentary claws. It looks dark brown above and paler below; chick, chin and throat are whitish. Coat is smooth and ungrizzled. Head and body length is 40-64 cm; tail 24-35 cm. It weighs 3-6 kg. It is found in the edges of streams, canals, swamps, ponds, lakes, creeks and flooded fields of eastern hill forests and coastal districts. Habitat loss and change are the main threats to this species. The species also occurs in India (southern part), Sri Lanka, Nepal, Bhutan, Myanmar, Thailand, Vietnam, Laos, Kampuchea, Indonesia, Malaysia, The Philippines, Brunei and Singapore.

Lutra lutra, also known as Eurasian otter has streamlined body with glossy chocolate brown waterproof fur, pale below, grizzled dorsally. The toes are webbed and act as paddles; heavy long muscular tail is laterally compressed. The hairs of muzzle terminate above the naked nose in an angular or zig-zag line. Head and body length is about 75 cm; tail about 45cm. Weight is about 10 kg. The otter is solitary in non-breeding season; families sometimes join together usually at night for fishing. Fish is the main food; also crabs, crustaceans, frogs, rodents, waterfowl, sometimes even leaves and other vegetables. Two to three youngs are born after a gestation period of about 2 months, and are nursed in a 'hole' dug by the edge of waterbodies. Lives in the streams, lakes, rivers, ditches, ponds and vegetation on the edges of these waterbodies. Found in the water-bodies in the forests and in the coastal districts. The species also occurs in Europe, North Africa, and greater part of Asia.

Also known as Smooth Indian Otter, Lutra perspicillata, is an endangered species in Bangladesh. It looks similar to the Common Otter but coat smooth and sleek, not grizzled; tail tip flattened. Hairs of the muzzle terminate in a straight line above the naked part of the nose. Colour is blackish to rufous chocolate-brown or sandy brown. It lives in families; feeds mainly on fish, but preys on anything whenever fish is scarce. It gives whistles when alarmed, but yelps when excited. Cubs are born in the first half of the year. The otter can be tamed for use in fishing. It lives in the margins of lakes and streams, large tanks, canals, flooded fields, creeks and estuaries. It is distributed in the eastern hill forests and coastal districts. The species is also found in Iraq, India, Nepal, Bhutan, Myanmar, China (southwestern part), Vietnam, Laos, Kampuchea, Singapore, Malaysia, Indonesia and Brunei. [Md Anwarul Islam]