Paharpur, Physical Framework a small village, 5 km west of Jamalganj railway station in Joypurhat district where the remains of the most important and the largest known monastery south of the himalayas has been excavated. The site includes the Badalgachhi upazila of Naogaon district and lies between latitudes 25'0'N and 25'15'N and longitudes 88'50'E and 89'10'E. This 7th century archaeological find covers approximately an area of 0.10 sq km (10 ha) of land. The entire establishment, occupying a quadrangular court, measuring more than 275m externally on each side, has high enclosure walls about 4m in thickness and from 3m to 4m in height. 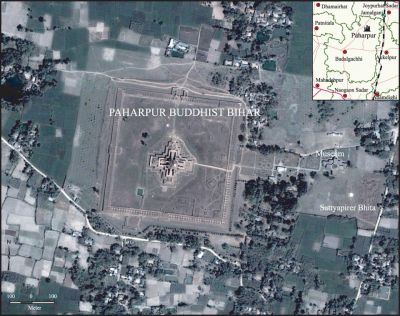 Climate is featured by tropical monsoon with most of the rainfall occurring between May and October. As far as the temperature, pressure and precipitation is concerned the area can be included within the climatic subzone of very hot summer and relatively low rainfall. The maximum temperature ranges from 37°C to 39°C and the minimum temperature from 7°C to 10°C. Rainfall is very light from November to February, increases somewhat in March and April and continues uniformly at about 25 cm during the monsoon months June to September. In May and October the rainfall is about 13 cm. The total average fall for the year is 508.0 cm.

Soil The soil of the area falls into three divisions- the red soil of the Barind, the light loam of those parts of the alluvial plain which have nearly risen above normal flood level and the soil of those tracts which are covered in the rains by deep water. The red clay of the Barind contains an excess of iron and lime but is deficient in siliceous matter. Winter rice is practically the only crop grown in this division. The higher alluvium occurs along the riverbanks. The rivers have raised the level of the soil. This soil produces Jute, turmeric, sugarcane, potato and rice. The soil of the marshes which is ordinarily black loam and very fertile forms the third division.

Agriculture Crops are grown almost everywhere but natural vegetation remains in several small areas. Rice mainly aus' [aux] and transplanted aman' [aman], is by far the most extensive crop. In the floodplains farmers usually grow aus and followed by transplanted aman. Artificial platforms and homestead areas are used for vegetables, bananas, fruit trees, betel leaf (pan) and seedbed for aman rice. About 10% of the area are triple cropped, 38% double cropped and 40% single cropped.

Topography and relief This area represent typical Barind Tract physiography which means slightly elevated landform terraces within the alluvium. These areas are higher in elevation (8m to 15m) than the surrounding flat plains and form a distinct, relatively flood free physiographic unit.

Drainage' Paharpur is well drained by numerous small, entrenched, meandering streams and rivers. The area is devoid of any major river. The Old Jamuna, atrai and other small streams drain far away from the Paharpur temple. On the western side, the river Old Jamuna flows north to south and maintains a meandering course forming many oxbow lakes. Atrai is another prominent river that flows towards the south, but far from the Paharpur site. Many standing water bodies, which are locally known as baors, are also present in the area and are connected to the rivers by man-made channels.

Barind terrace This unit covers the major part of the area and represents a series of uplifted blocks of Madhupur Clay of the Pleistocene age. This terrace is divided into three blocks by the little Jamuna and Atrai floodplains. The Barind Tract is undissected and has poorly drained well-oxidised red and brown soil.

Little Jamuna floodplain occurs in the northwestern part of the Paharpur site. The landscape comprises a fault trough and has extended its sediments over parts of the adjoining Barind surface. The relief is generally gentle, but broken locally by many man-made cultivation platforms. The deposits are mainly silty and sandy. The basin sediments in the Little Jamuna meander floodplain are clayey and usually overlie weathered Madhupur Clay with a depth of 12-20 cm.

Geology The archaeological site of Paharpur is situated on the shelf area of Bangladesh. Tectonically, it includes the active Bogra slope nearest to the Hinge Zone. The basement rocks are characterised by numerous criss-crossed fault traces. Faults have vertical displacement trending N-S, E-W and NNE-SSW.

Several anticlines or dome like features and synclines or trough like irregularities may be present in the main structural basin of the Paharpur coalfield. It is further believed that the axial region is undulating or corrugated as though buckled by the compressive force acting from east to west.

No sediments older than the Pleistocene Madhupur Clay Formation are exposed in Paharpur. However, in the subcrop of the stable shelf region including the Bogra slope, sedimentary rocks range in age from Permian to Recent are present above the Precambrian basement rocks.

The seismic zoning of Paharpur area lie within the zone ii where shocks of maximum intensity of VIII and basic seismic co-efficient of 0.05 is suggested. [Sifatul Quader Chowdhury]