Palanquin (palki) a traditional means of communication now very rare. It is borne on the shoulders of two, four or even eight bearers of special caste or class. The origin of the word is sanskrit palayanka (a traveling bed). Its pali form is palanka and Hindi and Bangla, palki. The Portuguese are said to have added a nasal termination to any of these words and called it palanquin. There is a reference to palki in the ramayana. ibn batuta had personally used palki and so did the traveler of the same time, John Maignolli (c 1350). Palki was one of the means for troop movements during akbar's reign and after. 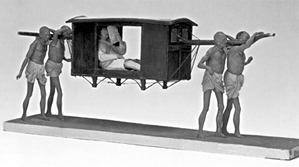 It was a luxury on the part of the pre-modern aristocratic and affluent people to move in palanquins, which were of many sizes and designs. The smallest and most austere one was called doli, which was borne by two persons only. The larger palanquins were borne by four to eight persons. The very affluent and aristocratic people used to move in large and decorated palanquin borne by eight bearers.

The European traders in Bengal in the 17th and 18th centuries used palanquin in visiting hats and bazaars and also in transporting their cargo. They got so much used to the palanquin mode of transport that even a newcomer who joined as a writer in the company's service at a very nominal salary indulged himself in buying a palki and maintaining an establishment for it. This was identified as a problem since the habit of a person to buy palki was something that could lead to other pernicious habits. In response to the problem the Court of Directors of the east india company issued an order in 1758 that prohibited the writers (small clerks) from buying and maintaining palanquins. The fact only indicates that palki was in those days what a motor car is today. In the pre-steamer and railway era, even the governor general often found it convenient to move in palanquin.

With the abolition of slavery, the palki labours began to come from Bihar, Orissa, Chotanagpur and Central Provinces from the first quarter of the nineteenth century. Many santals sold their labour locally as palanquin bearers. They came from their homelands during the dry season and mostly left their spots on the onset of the monsoon rains. They had more or less fixed places to visit at the end of the rainy season every year and made their temporary huts at some public or private place.

Palanquin as a mode of transport began to decline from the mid-nineteenth century when steamer and rail communications started and general transportation began to improve. With the development of roads and highways and increasing use of animal carts and carriages the palanquin as a means of transport faced extinction. The introduction of rickshaw in the 1930s had, in fact, ousted it from the urban areas. But the families maintaining purda system used palanquin even down to the 1960s. The ever expanding communication network, introduction of motorised vehicles in land and waters all over the country, and the popularity of pedalled rickshaw have now made palki an institution of the past. [Sirajul Islam]