Panam ancient Painam, a locality now in Sonargaon upazila of Narayanganj district, about 2.5 kilometre to the north of Dhaka-Chittagong highway at Mograpara point. It is said to have been the site of Hindu capital city of Sonargaon emerging in the seventh decade of the thirteenth century. The Panam area formed part of the Muslim metropolis developed on the south of the old city, and perhaps constituted the place of residence of the early Muslim governors. 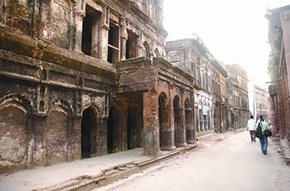 In all probability the present Panamnagar grew as a by-product of the commercial activities of the English east india company and of the Permanent Settlement. The East India Company established their factory in Panam for the purchase of muslin and other cotton fabrics. The Company, for the purchase of muslin, used to distribute annually to the weavers from their factory in Panam as much as a lakh of rupees as dadni (dadni system advance), and it is estimated that there were then 1400 families of Hindu and Muslim weavers in and around Panam. Sonargaon developed into a centre of trade in cotton fabrics, chiefly English piece goods, during the colonial period, and thereby grew the new township of Panamnagar. A group of Hindu talukdars, who came into being from among the traders in the nineteenth century, chose this site for their residence. The existing brick buildings of Panamnagar, obviously the residence of the Hindu merchant-talukdars, can be dated back to early nineteenth, and the later ones to late nineteenth and early twentieth centuries. Panamnagar which developed in the nineteenth century, continued to flourish till the end of the Second World War.