Papaya soft-stemmed, unbranched tree, Carica papaya, of the family Caricaceae, with a crown of palmately lobed leaves. The plant is cultivated for its melonlike fruits that are eaten raw or cooked and when ripe. Papaya originated from Central America and was introduced into South Asia during the later part of the sixteenth century. The fruit juice contains the enzyme papain, which is somewhat similar to pepsin and digestant in action. 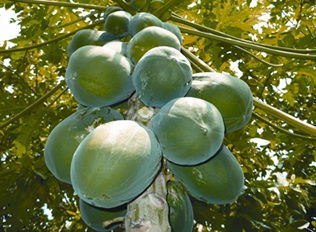 The area and the annual production of papaya in the country is about 7,712 ha and 50,616 m tons respectively; more than 60 percent of the papaya produced is consumed as vegetable. It is basically a dioecious plant in which the male and female flowers are borne on separate plants. As the sex is controlled quantitatively by several pairs of genes, intermediate plants having both male and female flowers also occur. Since no method for identifying male and female plants at the early stage is available, it is necessary to plant 2-3 seedlings in each pit in order to ensure enough female plants in a planting. [Mamun-ur Rashid]