Patnitala Upazila (naogaon district) area 382.39 sq km, located in between 24°59' and 25°12' north latitudes and in between 88°35' and 88°55' east longitudes. It is bounded by dhamoirhat upazila and west bengal state of India on the north, mahadebpur upazila on the south, badalgachhi upazila on the east, sapahar and porsha upazilas on the west.

Administration Patnitala Thana was formed in 1907 and it was turned into an upazila in 1983. 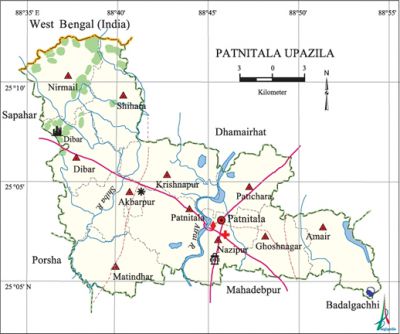 Natural resources Zinc mine (Ambati), lime stone (Chawknirkhin) and China mati (a fine species of porcelain) have been detected in the upazila.