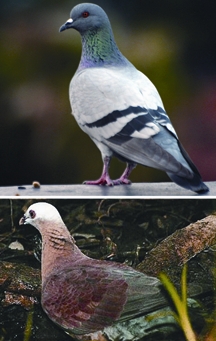 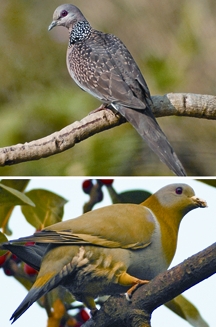 Pigeon and Dove (kabutar and ghughu) plump and rounded-bodied birds of the family Columbidae, order Columbiformes. Their flight is swift and powerful, short and direct. Sexes alike in most species. Often fly long distance for fruits, seeds, grains buds, drupes etc. as food. Nests look like sketchy platforms of a few sticks in trees, on edges or in holes in cliffs etc. Eggs are normally two. Incubation and care of young by both sexes. Initially the nestlings are fed on a secretion of the parent's crop known as 'pigeon's milk'.

They have booming calls or mellow musical whistles. The common rock dove was domesticated some 5,000 years ago. The homing instinct of some domestic breeds extensively exploited for carrying messages prior to the advent of wireless telegraphy and even during the two World Wars.

Green pigeon (harial) pigeon like birds belonging to the family Columbidae, order Columbiformes. The order also includes doves, and other pigeons. There are 140 species of pigeons worldwide. Bangladesh has 10 species, of which 6 are green pigeons. [Md Khalilur Rahman]