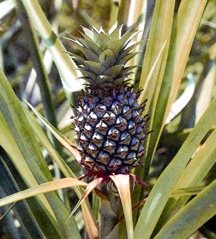 Pineapple (anarash) edible, juicy, multiple tropical sorosis fruit, Ananus sativus, which develops from a spike or head of flowers and is surmounted by a crown of leaves. A native of Brazil, the fruit is widely taken for fresh consumption as well as their flesh and juice for canning. It probably was introduced India in 1548. Hawaii is the leading producer of pineapple.

The plant is a short-lived perennial with rosette leaves on a very short axis. There are 100-200 individual fruits arranged spirally around the thick central axis and the whole part of flowers form a succulent, broad almost cylindrical multiple fruit, weighing about 0.5 to 5 kg. The fruit matures within 5-6 months after flowering. Mature fruit contains 14% of sugar; a protein digesting enzyme, bromelin, and good amount of citric acid, melic acid, and vitamin A and B.

In Bangladesh it was introduced through Assam and Manipur of India and was first cultivated in Sylhet in the beginning of 20th century. It is now cultivated in almost all the districts of Bangladesh although Sylhet, Tangail, Dhaka, and Rangamati have more acreage under cultivation.

About 45,685 ha of land are now under pineapple cultivation with a total production of about 2,34,865 m tons. The cultivated varieties are Giant Kew (locally kalendar), Honey Queen (jaldubi), and Red Spanish (ghorashal). Flowering starts from March to May and fruiting from June to September. [Mostafa Kamal Pasha]