Presidency College originally called hindu college, started its eventful journey in 1855. Certain compelling and relevant considerations brought about its renaming into Presidency College. By mid-19th century the Hindu College had outgrown the plans of its original founders.

Not only did it attract an ever-increasing number of scholars from far and near, but it had also introduced courses in Law, Drawing, and Engineering, which catered to the needs of all classes of students - Hindus as well as non-Hindus. 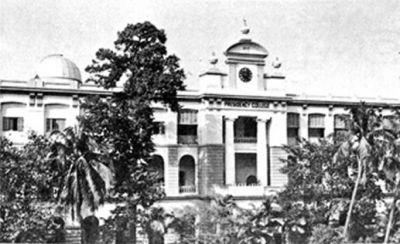 The government had also to consider whether this growing institution spending a good deal of public money could be retained as a non-governmental institution, particularly when Calcutta had no general college managed exclusively by the Council of Education. In the fitness of things, when smaller towns had government colleges, it became imperative that the metropolis should also have one.

The proposal to set up a new college called the Calcutta College, or the Metropolitan College open to students from all communities was already in the air, but this would have meant greater financial liability on the government, which would also have to provide it with a competent faculty. A viable alternative was to convert Hindu College into a general institution open to all communities, managed by the government. Accordingly, the Committee of Management for Hindu College met for the last time on 11 January 1854. The Court of Directors renamed the College as Presidency College. It started functioning on 15 June 1855. With the formation of the university of calcutta, located nearby, however, the Council of Education had to shelve its plans of associating the Medical College and the Civil Engineering College with Presidency College and expanding it into a University.

In 1856, Presidency College had 132 students on its rolls. 94 of them were in the General Branch and 38 in the Legal Branch. Of them, 82 had paid tuition fees, 43 were scholarship holders, and seven were enjoying free studentships. The Legal Branch was placed partly on a separate footing, its students being examined by the Professors themselves. Two years later bankimchandra chattopadhyay of the Law Department earned the distinction of being one of the first two graduates in Arts of the University of Calcutta.

The year 1857 was indeed a momentous year, for it saw the birth of Calcutta University. It became part of the University's task to determine the courses of studies for colleges affiliated to it. Since Presidency College was the first college to be affiliated to the University, it became an institution preparing candidates for the BA examination. At the first Entrance Examination, held in 1857, Presidency College sent 23 students. The MA degree was conferred for the first time on six students of this college in 1863.

The First Arts or FA Examination was introduced in 1861. The first candidate to qualify in this examination from Presidency College was Gooroodas Banerji, who also became the first Indian Vice-Chancellor of the Calcutta University. The ever-increasing rolls of the college were indicative of the keen interest being shown by students from all across the region. The prestigious award of the Gilchrist Scholarship for studies in England went to students of this college for four successive years since its introduction in 1868. The college soon expanded its campus and the present edifice was officially opened by the Lieutenant Governor on 31 March 1874 in the presence of the Viceroy. Nuffer Chandra Pal Chowdhury provided the building with a turret clock. The new building enabled the extension of scientific studies. The chemistry department could thus introduce practical classes by 1875. Engineering classes being held at the college were discontinued in 1880 when the Howrah Engineering College was set up.

In order to augment the Faculty of Science a professorship of Geology was instituted in 1892. The Department of Biology was founded eight years later and SC Mahalanabish was made a Professor. The last two decades of the 19th century saw the appointment of distinguished scholars to teaching positions at Presidency College. For instance, HM Percival joined in 1880, Bipinvihary Gupta in 1883, jagadish chandra bose in 1885, prafulla chandra ray in 1889, and Manmohan Ghosh in 1896. Between 1868 and 1900, 25 students of the college were awarded the premchand roychand studentship, the highest honour for academics given by Calcutta University.

Commerce classes were added in 1903. Baker Laboratories, named after Edward Norman Baker, the Lieutenant Governor, was formally opened on 20 January 1913 and the departments of Physics, Physiology, Botany and Geology were transferred to the new set-up. One of the biggest rooms in the Baker Laboratories accommodated the science library (the Peake Library, named after Prof CW Peake). The outbreak of World War I in 1914 interrupted plans for the building of an additional hostel and other facilities but the college continued to cross-important milestones in the advancement of teaching and higher learning. New dimensions were added to the college with the reorganisation of the Library in 1908 and the introduction of a college union in 1914. The 1920s saw eminent teachers such as Prof Wordsworth, Prof Sterling, Prof Home and Dr Harrison embellishing the faculty.

During the non-cooperation movement and the civil disobedience movement, JR Barrow served as the Principal of the college. He set the highest standards of discipline and academic excellence, but also meted out punitive action to students participating in the nationalist upsurge. His objective, however, was never in doubt, and he earned the deep respect and appreciation of teachers as well as students. From the 1930s, Indian Principals headed the college, though the Education Department retained the services of British officers until 1947.

Cultural activities received a fillip through the Rabindra Parishad and the Bankim-Sharat Parishad that were formed in the 30s, in which intellectuals such as pramatha chowdhury, surendranath dasgupta, indira devi chowdhurani, Santa Sen, Nirmal Kumari Mahalanabish, prasanta chandra mahalanabish, rani chanda, atul chandra gupta, Samarendra Nath Tagore and Upendra Nath Gangopadhyay participated. A few of the meetings of the Parishad were presided over by rabindranath tagore, abanindranath tagore and sharat chandra chattopadhyay. The Great famine of 1943 inspired a large number of students under the leadership of Amlankusum Dutta to carry out relief operations from the Hindu Hostel of the college. The college retained its secular image through the dark days of communal strife preceding Independence and the Partition of India. Immediately after Partition (1947), some erudite scholars and teachers such as muhammad qudrat-i-khuda left for East Pakistan. [Rachana Chakraborty]