Primates an order of the vertebrate class Mammalia that includes man, the apes, monkeys, lorises, and lemurs. Carolus Linnaeus used the name, meaning 'chiefs', in 1758. The majority of primates are adapted for life in trees, but many are ground dwelling. Some principally feed on leaves, fruits and different vegetable matter, while others are insectivorous; many eat fruits and leaves but also hunt live prey. Primates range in size from about 30 cm in marmosets, weighing less than a kilogram, to gorillas, which stand almost 200 cm high, and may weigh as much as 350 kg.

The first primates appeared in North America and Europe in the Palaeocene epoch (65-53 million years ago). Early forms such as Purgatorius were small and bore a striking resemblance to the living tree shrews. The lemurs and lorises are known as the lower primates or prosimians, while the monkeys, apes and man are variously called the higher primate, simians or anthropoids. The higher primates are divided into two major groups: the Platyrrhini (the New World monkeys), and the Catarrhini (the Old World monkeys, apes and man). Of the 180 or so species of living primates, 83 are Old World primates. Of these nine are gibbons. Gibbons are also known as lesser apes, while the Orang-utan, Gorilla and Chimpanzee are known as greater apes. Man is the only one to walk fully upright.

The use of tools and fire, and the ability to make clothes and efficient shelters have allowed man to penetrate nearly all climatic regions of the world. None of the great man-like apes are found in south Asia, the Gorilla and Chimpanzee occur in Africa, and the Orang-utan in Borneo and Sumatra. The only lesser ape inhabiting South Asia are the gibbons of which a single species, the Hoolock Gibbon or White-browed Gibbon (Hylobates hoolock), is found in the forests of Sylhet, Chittagong, and the Chittagong Hill Tracts. This species is also found in Assam in India.

Of the 180 or so known species of recent primates, 25 are found in South Asia. Bangladesh has 10 species in 4 families.

Some of them are threatened. Slow Loris (Nycticebus coucang) A member of the family Loridae. Face resembles that of lemur. Body dark ashy-grey or grey-brown with a darker band down the middle of the back; beneath lighter grey. Eyes owl-like, circled with dark patches. Head rounded, ear and tail very small. 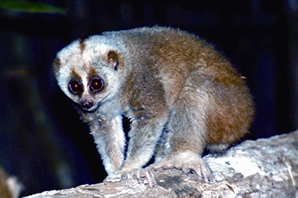 Usually lives in small groups of 5-15; larger groups may comprise up to 100 individuals. Subsists mainly on vegetables, but eats insects and crabs when available and also raids crops. Female gives birth to one young after a gestation period of c. 6 months. Able to exploit a great variety of habitats, viz, evergreen forests, bamboo thickets, mangroves, etc. Occurs in Chakaria Sundarbans in the Cox's Bazar district. 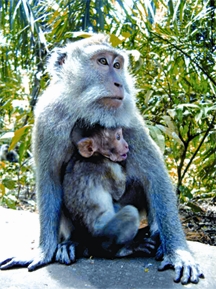 Hanuman Langur (Semnopithecus entellus) A critically endangered primate of the family Cercopithecidae. Most adaptable of all the langurs even in modified habitats. Tail longer than head and body; jaws long. Arms, legs and trunk long and thin. Body silvery grey, lower parts paler. Face, ears and soles of hand and feet black. Black face contrasts with the light hairs around it. Crown hairs rise into a crest or tuft; eyebrows well-developed, hairs behind the brows radiate to form a frontal whorl. Head-body length 50-110 cm; tail 70-110 cm. Weight: male 10-20 kg, female 8-18 kg. Lives in groups, usual group size being 15-25. Purely vegetarian, feeds on fruits, grains, pod, flowers, buds, shoots and leaves. Breeds during the first half of the year. Females become sexually mature at around three and a half year, and may have young every two years. Also occurs in India and Sri Lanka.

Phayre's Langur (Trachypithecus phayrei) Critically endangered primate of the family Colobidae. Brown to grey-brown back, white underparts and mouth. Eyes circled by broad ring of white ('spectacles'); face blackish; hands and feet black. Hair of crown elongated, directed backwards, not radiating. Tail longer than head and body, with a tuft of dark hairs at the tip. 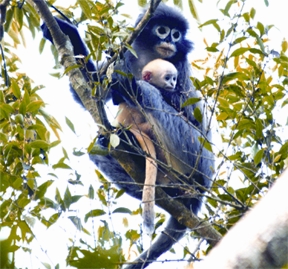