Punch Marked Coins are the earliest coins of the sub-continent as well as of Bengal, evolved in c 6th century BC. Silver punch marked coins have been found from mahasthangarh in Bogra, Rajshahi, Mymensingh and from the twin villages of wari-bateshwar under Narsingdi district. 93 silver punch marked coins have been discovered from Mahasthangarh through systematic excavations in 1996-97. Those coins are now preserved in the department of archaeology, Bangladesh. 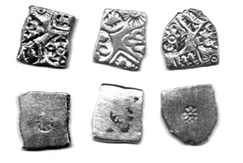 Twenty-four silver Punch Marked coins, discovered at the time of tilling of land at Yogir Bhita in Mahasthangarh in 1988, have been preserved in the varendra research museum, Rajshahi. For the manufacture of coins silver sheets were cut into small pieces of a specific weight or by melting the metal and pouring it on some other staff or by making pellets of molten metal; then they were stamped with punches having symbols. From this manufacturing technique these coins are known as ‘Punch Marked Coins’. Normally one to five symbols was punched on them, sometimes more than that was added. Punch marked coins found from Bengal bears either three, four or five symbols on each but no coins having four symbols were found outside Wari-Bateswar till now.

These coins were manufactured up to 2nd century AD, though they were in circulation all over India including Bengal up to about 4th century AD. There were no inscription or legends on these coins; instead they bore the symbols of human figures, artifact, arms, various forms of hills, animals, trees and fruits, floral and geometrical patterns and religious symbols. These coins were originally stamped with the marks only on one side, the other side remained blank. As the symbols did not indicate any particular ruler or period it is very difficult to ascertain the particular period of their manufacture or by whom they were manufactured. But each of the symbols is found confined to the coins of a particular area or on those of a particular variety or type. Thus the coins of one state can be differentiated from those of another. It is known from the literary sources that the contemporary people knew the meaning of these symbols. It is assumed that the symbols were generally the representations of the contemporary beliefs, thoughts and culture; representations of a lifestyle, tastes and culture of an era or mere depiction of the nature. Scholars differ about the probable meaning of these symbols, about the weights of the coins, purity of the metal and their alloy, circulation area of particular coin types, about their issuers and supply of the silver etc.

Punch marked coins discovered from Bengal may be divided into two broad groups: (1) Coins having a group of five symbols on one side, the imperial series coins, as defined by PL Gupta, and found from almost all over India and also found from all the punch marked coins producing regions of Bengal. Imperial coin series are found abundantly; (2) coins having less than a group of five symbols, either a group of three or four, local or regional coins. Scholars believe that the imperial series coins were manufactured and circulated during the Mauryan rule under state authority. Most probably the imperial series coins found from Wari-Bateswar were brought there through trade and commerce, because no evidence of Mauryan rule over that area has yet been ascertained.

From the archaeological excavations at Mahasthangarh such type of coins having five symbols were discovered from the Mauryan period strata and those have been identified as Mauryan Karsapana coins. The probable date of the coins are 5th century BC to 2nd century AD. Coins having group of five symbols have also been discovered from Wari-Bateswar, Rajshahi and Mymensingh regions. These coins bear on one side a group of five symbols, the other side either blank or have a small single symbol. Among these symbols mention may be made of surya, six-armed symbols, hill, elephant, cow, fish in pond etc. There are variations in each of the symbols. The shape of these coins are oblong or rectangular, square or round and they weigh 32 ratti standard of the Karspana weight ' 3.4 to 3.5 gram, half Karsapana are generally 1.6 to 1.7 gram in weight and measure 16 to 19 or 20 mm in length and diameter. The thickness ranges from 1.1 to 1.5 mm.

Local or regional Coins have been found from two regions of Bengal - Anga and vanga. 23 silver punch marked coins were discovered from three archaeological sites through excavations (Bangarh, Hari Narayanpur and chandraketugarh), as reported by Michael Mitchinar, have been identified as the coins of Anga Janapada. The obverse of these coins bears three symbols and the reverse either has a minute symbol or is blank. Though these coins, so far as the number of their symbols are concerned, are similar to those of Koshala and Magadha, but they differ in respect of symbols and metal. The coins of Anga are made of impure silver, on the contrary others mentioned above are of pure silver. All the coins of Anga bear a ship symbol on them. Such type of ship has not been found in any other local or imperial coins so far discovered. Two weight standard coins - Karsapana and quarter Karsapana- have been noticed which weigh 3.3 to 3.7 and 0.8 to 0.9 grams respectively. These coins have been assigned to a period sometime before 5th century BC.

The coins identified as Vanga coins were discovered from Wari-Bateswar, two villages of Narsingdi district, during normal digging of the earth. These coins bear on the obverse a group of four symbols and the reverse is either blank or have a minute symbol. Among these symbols there are boat, lobster, fish in hook or scorpion, cross leaf, snails (or flute of the snake charmer) and they have not been found from any other region. Other than these common symbols bird, elephant, fish, sun, six-armed symbol etc have also been depicted on these coins as have been seen on the coins of local and imperial series. But the fishes on the coins of Vanga are more realistic than fishes of other coins, which are mostly stylised. It is true that the coins of Vanga have not been found through regular excavations yet, and for the uniqueness of their symbols (particularly boat and lobster) these may be identified as coins of Vanga.

All the coins of Vanga, like the imperial series coins, bear the sun and six-armed symbols. Coins of Vanga with four symbols are comparatively thin and are of Karshapana weight standard. But all the discovered coins are half Karshapanas and their weight ranges from 1.7 to 1.9 gram. Their thickness ranges from 0.6 to 1.00 mm and their average measurement was 15 to 20 mm. Numismatists consider the coins having 4 symbols to be older than the coins of the imperial series having five symbols. Therefore, these local coins with four symbols may be assigned to a period before 5th century BC. It may be mentioned here that there is a sharp difference between the boats of Anga and Vanga and between the fishes of two places also. Among the coins of Wari-Bateswar 9 coins are with symbols of bird and boat and three coins are with fish and lobsters together with other symbols, which are common in all these twelve coins. [Rezaul Karim]