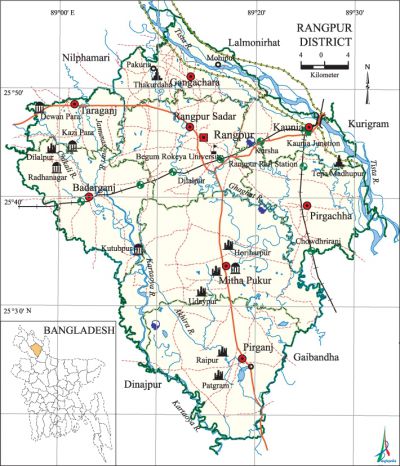 History of the War of Liberation In March 1971, the Pak army killed Shanku Samaddar, Abul Kalam Azad, Mokbul Hossain and Omar Ali of Rangpur sadar. On 28 March 1971 the people of Mitha Pukur upazila surrounded the Rangpur cantonment with indigenous weapons such as Lathi, Ballam, bow and arrow, etc. At this time the 29 Cavalry Regiment fired from machine gun and killed a large number of people. The Pak army conducted mass killing and heavy plundering in this upazila most noted of which is the mass killing of Joyram Anwar Mouza of Pairaband union. On 1 April 1971, the freedom fighters of Kaunia upazila shot the Officer in Charge of the Police Station dead. On 13 April the Pak army brutally killed 11 Bangali EPR personnel at Nandiganj of Pirganj upazila. On 17 April the Pak army and their local agents conducted mass killing in Badarganj upazila; they also sacked the villages Khalisa Hajipur, Bujruk Hajipur, Ghatabeel and Ramnathpur. The Pak army killed Professor Chitta Ranjan Roy (Mathematics), Professor Boam Krishna Adhikari (Philosophy), Professor Sunil Chandra Chakravorty of the Department of Bangla, (all residing in the Rangpur Carmichael College campus), on the night of 30 April and buried them in a mass grave inside a bamboo hedge near the Damdam Bridge. Besides, the Pak army also killed some teachers and students including Professor Kalachand Roy along with his wife, Professor Md. Abdur Rahman, Professor Shah Solaiman Ali in the College compound. The Pak army had their torture cell at Rangpur Town Hall. On 2 June two Pak soldiers entered into a village near the Tista Bridge of Kaunia upazila and attempted violation of women; the agitated villagers killed both of them. In consequence, on 30 June 1971, the Pak army sacked the villages located on the western side of the Tista Bridge and killed nearly 200 persons. In August the Pak soldiers captured a number of people at village Darar Par of Sayar union under Taraganj upazila and later on killed all of them. In the month of October an encounter was held between the freedom fighters (Mujib Bahini) and the Pak army at village Shankardaha of Pirgachha upazila in which 2 Pak soldiers and 5 razakars were killed. The Pak army brutally killed 17 pious Muslims inside the Taltala Mosque. On 2 December another encounter was held between the freedom fighters and the Pak army at Monurchhara of Parul union under Pirgachha upazila in which one freedom fighter was killed and so were two Pak soldiers. On 3 December the Pak army conducted mass killing on the Barati Bridge over the river Jamuneshwari. On 13 December, 212 razakars of Gangachara upazila surrendered to the freedom fighters. On 17 December the Pak army surrendered to the joint forces and thereby Rangpur district was liberated.