Rickshaw one of the principal means of transport in the urban areas of Bangladesh. With the improvement of road communication throughout the country, rickshaw has now found its way into rural areas as well. As a mode of transport rickshaw was first introduced in Japan in the early twentieth century. This mode of transport became particularly popular there due to the Second World War situation, which made petrol and motorised transport scarce and expensive. Japan, however, had soon replaced rickshaw, nintaku in Japanese, with motorised vehicles and by the 1950s the cycle rickshaw had disappeared from Japan.

In the 1930 and early forties rickshaw became popular in Indonesia, Singapore and other Southeast Asian countries. Rickshaw is said to have reached Chittagong from Myanmar in 1919. Interestingly, rickshaw did not spread out to Dhaka and other cities of Bangladesh from Chittagong.

Dhaka got rickshaw from Calcutta, where it was first introduced around 1930. European jute exporters living in Narayanganj and Netrokona (in Mymensingh) had first imported cycle rickshaw from Calcutta in 1938 for their personal use. The new vehicle roused great curiosity among the people of Dhaka, who were traditionally used to horse carriages, palanquins and city-canal boats. Initially cycle rickshaw did not receive enthusiastic response from users. 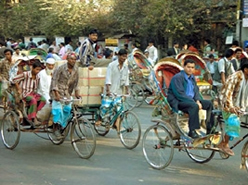 The Dhaka city had only 37 rickshaws in 1941 and 181 rickshaws in 1947. Before 1947, Dhaka was a district town, which had a population of 62,469 only according to 1951 census. But in 1998, the city's population grew over 8 million and the number of registered rickshaws in the city was 112,572. The number of rickshaws in all other cities of Bangladesh in that year was 274,265 and in all villages 91,040. Rickshaw and rickshaw vans (also a tricycle vehicle similar to rickshaw but with the difference that instead of passenger seats, these have a flat bed of wooden bars resting on the axle over the rear pair of wheels and they carry goods in small lots) are now fast replacing the traditional transports like horse carriages and bullock carts in the country.

It is a popular guess that the total number of rickshaws in the city is at least two and a half times that of the registered ones and accordingly, the city had at least 280,000 rickshaws in 2000. Estimates based on the figures that each rickshaw is operated by two pullers in morning and evening shifts and the average number of family members of a rickshaw puller is five, suggest that the rickshaws of Dhaka city alone is a source of income for nearly three million people.

Unlike in all Southeast Asian countries, rickshaws in Bangladesh have a lasting foothold. It has established itself with a dominance unmatched by other modes of transport. The predominance of rickshaw as a transport is evidenced by the fact that the percentage-wise traffic composition in Dhaka, Sylhet, Comilla and Rangpur cities are 49%, 78%, 80% and 55% respectively. Other means of transport in Dhaka are, in order of traffic, the (a) cars, jeeps, pick-ups etc. (b) baby taxi, (c) bus, (d) truck, (e) tempo and (f) bicycle. Bicycle, however, is the second in the list of predominant vehicles in cities outside Dhaka.

Fifty percent of the value added in transport sector is being contributed by rickshaws and the mode of transport provides employment and living to people engaged not only as the pullers directly but also as its manufacturers of its mainframe, the body with seat and hoods and its spare parts. A great number of people depends for the living on the decoration of rickshaw body, artwork on it and rickshaw garages. [Sirajul Islam]

Rickshaw Art decorative art of rickshaws, which may be extended to cover all rickshaw decoration, from painted backboards and rear side panels to cut-outs appliquE9d on to hoods and brass vases replete with plastic or paper flowers. In a restrictive sense it is generally applied to the painted backboard, a tin plate fixed to the lower rear of a rickshaw hiding the chain. In this sense it is also extended to include the paintings on the rear of autorickshaws or baby taxis. Rickshaw art has been compared to traffic art in other parts of the world, such as the decorated trucks of Pakistan. 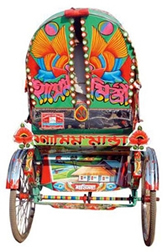 Rickshaw art is mainly an urban phenomenon and perhaps dates back to the 1950’s. It shares some similarity of theme and execution with movie billboards, which may be ascribed to the fact that many rickshaw painters had either themselves painted movie billboards or had apprenticed with such painters. The art of the rickshaw painter is passed on from ustad, master, to apprentice. There is a lot of repetition, either because of the popularity of some motifs or because of the influence of the master craftsman. The paintings are executed quickly, with readymade enamel paints, which do not allow paints to be mixed. Bright primary colours are popular and the painting is flat, lacking shadows, perspective, and scale.

There are variations in rickshaw art in different towns of Bangladesh. For example, nearly eighty per cent of rickshaws in Dhaka city are decorated and most of them have animal scenes, natural scenes, and pictures of movie themes. Chittagong and Comilla areas show less enthusiasm about decorating rickshaws and the rickshaw art there contain fewer human images and have more images of flowers, birds, animals etc. Rickshaws in Sylhet, considered to be a more pious area, are rarely decorated.

Among popular themes are the Taj Mahal, movie scenes and portraits of movie stars, idyllic scenes of rural Bengal with plump hens, placid cows, coconut palms, neat huts, and gentle streams. Islamic scenes such as mosques and Borak, the winged horse, are also frequently found. Because rickshaw backboards have to be painted annually, rickshaw artists often depict topical themes. In the early seventies, scenes of fighting between muktijoddha (freedom fighters) and Pakistani soldiers were common. Increasingly common, especially on autorickshaws are scenes of futuristic cities, planes and other fast-moving forms of transport.

Rickshaw artists do not always sign their pictures. Sometimes the name of the rickshaw garage owner or rickshaw maker or mistri is noted on the plate. Sometimes artists paint under pseudonyms. Occasionally, a number of artists share the same name, and, at other times, a plate executed by an apprentice, is signed with the name of the master. It is probable that, with the increasing recognition being given to this form of folk art (a collection of rickshaw paintings has been given to the bangladesh national museum and a non-government organisation is popularising rickshaw art) more and more artists will sign their names. [Niaz Zaman]