River Port Since Bangladesh is crisscrossed by rivers, river ports and river ways have been playing a significant role to the transportation of goods here and there. Almost all big cities and commercial centers of Bangladesh have been established by the river-ports. 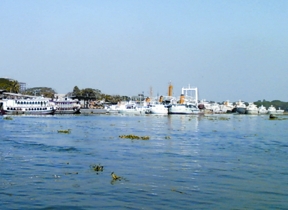 A river-port named by Tomlitis, has been discovered in the map of Ptolemy, a Greek scholar, which is identical to the port of Tamralipi or tamralipta. In spite of having disagreement with the location of the river port, it is generally presumed that Tamluk, located in the conduit of the Rupnaran River, close to the Bay of Bengal, is located in the Medinipur district under present West Bengal in India. Besides, Shaptogram or satgaon and Chittagong port located in the conduit of the Sharasati River and Karnafuli River respectively, were famous during ancient and medieval age. Although those ports were located at the contour of the river, in fact, those were the hubs of seafaring. The memoir of

Ibn batuta, a Moroccan globe traveler during Sultani era, and travelers of China suggest that they came to sonargaon by river via Chittagong sea-port. During Mughal era, when Dhaka became the capital, the importance of Sonargaon inland port spilled downward. Since then, the river-route of Bengal became an import issue to set off communication with North India. The Ganges contributed to link river route with Bihar and Uttar Pradesh and the Brahmaputra as well as the Meghna became an important means of communication with Assam. When the English set out its rule over Bengal in the eighteenth century, Kolkata became administratively more important than Dhaka. By this time, due to setting up of trading ties with the river-ports of Kolkata and Hughli, Narayangonj, Chandpur, Barisal, Madaripur, Khulna, Goalanda river-ports became very important. Beside, to make communication with Assam reroute to Northern part of Bengal, river ports of Shirajgonj and Chilmari on the bank of Brahmaputra or Jamuna were not insufficiently important. Goods and passengers were carried and transported by boats of huge sails through these ports.

In the second half of the 9th century, two private companies: Indian General Navigation Company and River Steam Navigation Company took initiative to launch steam engine driven marine vessels to ship goods from Kolkata river port to East Bengal river ports. Since then sail boats and ships are being replaced by motorised marine-vessels. Due to the change of the course of rivers and development of road and railway networks, many river ports have, on the one hand, lost their importance; and on the other hand, many new river-ports have been emerged.

Presently two organisations: Bangladesh Inland Water Transportation Authority (BIWTA) and Bangladesh Inland Water Transportation Corporation (BIWTC) control the marine vessels ply in the inland river-ways and the river ports of Bangladesh. According to the statistics of BIWTA, there are twenty two complete river-ports are in Bangladesh. These are: Dhaka, Narayanganj, Barisal, Chandpur, Khulna, Baghabari, Patuakhali, Narsingdi, Aricha, Nagarbari, Daulotdia, Tongi, Maoa, Char-Jannat, Ashugonj-Bhairab Bazar, Bhola, Barguna, Noapara, Munshigonj, Chatak, Meghnaghat and Cox's Bazaar. These river-ports have necessary arrangements to load and unload passengers and goods and to land motorised marine vessels. Apart from these, with the initiative of BIWTA, another 448 small-medium ports have so far been improved or set up, which are called 'Secondary Riverine Port'. According to BIWTA, there are 374 places have so far been identified where BIWTA does not have any establishments. Those ports are used to load and upload the goods and passengers. In addition, there are eight ferry jetties which are used for the transportation of motor vehicles carrying goods and passengers. The BIWTC has set up pilot stations in 24 river ports all over the country. These are: Chittagong, Ramgoti, Barisal, Narayanganj, Chandpur, Natuapara, Madaripur, Kawkhali, Mongla, Angtihara, Maoa, Aricha, Kaulia, Sirajgonj, Kazipur, Bahadurabad, Chilmari, Doi-Khaoa, Patuakhali, Bhairab Bazaar, Lipsa, Paturia and Boidder Bazar. [Fazilatun Nesa and AKM Khademul Haque]