Road Transport developed in Bangladesh territory at a slow pace in the past because of the predominance of a water transport system in the vast network of rivers. Physical complexity, particularly a dense network of rivers with numerous large and small tributaries, tidal channels and very low elevation have largely determined the evolution and nature of transportation system in earlier days in the bengal delta. The region is so flat and low that the mean elevation hardly rises anywhere to more than a few meters above sea level. During the rainy season it becomes a vast waterlogged area where boats of various sizes and shapes appeared to be the only possible modes of transportation in many places even if a few decades ago. In a region such as this, all-weather roads and railways could be developed only on high embankments with numerous culverts and bridges to overcome the barrier of water bodies. One of the earliest raised roads and embankments constructed in the Bengal basin was the road running on raised embankment, from Dhaka to Sangramgarh (supposed to be in Noakhali district). This road was built by Shaista Khan early in aurangzeb's reign. Between the two other major old roads, one was from Bagdwar to Kuch Bihar running from Kamatapur to Ghoraghat through Bhotmari, Dhap, Malang and Pirganj in North Bengal and the other was from Rangamati to Kuch Bihar. These two roads were linked to a system of fortifications comprising more or less a continuous line of embankments in circuit and enclosing much of Kuch Bihar's territory.

In the Map of Hindoostan, Rennell noted six major land routes linking Calcutta with the outlying regions, of which two land routes penetrated deep into the region of today's Bangladesh. The first route went over the plains of north Bengal from murshidabad via Rajshahi across the padma river. The second route crossed the southern deltaic Bengal to Dhaka and Sylhet. This was an extremely difficult land route across numerous rivers and canals. According to Rennell, the actual road distance of Dhaka from Calcutta was 177 miles and has Chittagong 317 miles.

In the early days of the Company rule, improvement of roads was undertaken chiefly with the view to facilitating military movement and postal communication. The idea of wheeled traction was formed only after the reconstruction and repair of the grand trunk road. In Bengal, the duty of opening and maintaining local roads was imposed on zamindars and, under the Regulation VII of 1822 and IX of 1833, one percent on all temporarily settled estates was levied to form a road fund. The main roads were at that time under the Military Boards, one for each Presidency.

During the first few years of the British rule, direct government expenditure for transport was mainly on trunk roads. This was probably because both railways and steam navigation were yet to unfold their potentialities in carrying trade in the eastern region. As for example, the report of 1867-68 noted that the greater part of the Imperial expenditure under the head 'communication' had been upon trunk line of roads. 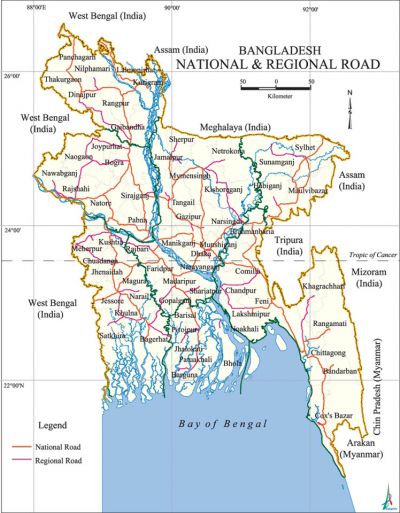 The 1860-61 Annual Report on the Administration of Bengal Presidency noted the existence of feeder roads to serve the eastern bengal railway. Annual Report of 1870-71 recorded existence of seven important roads in eastern India, all basically radiating from Calcutta and connecting it with about half a dozen other nodal points. Of the seven important road systems in eastern India, three were relevant in the context of development of roads in Bangladesh. These were: (a) the Darjeeling Trunk Road linking Calcutta with Darjeeling through Berhampore, Bhagwangola, Godagari, Dinajpur and Shiliguri; (b) the Jessore Road linking Calcutta with Faridpur through Bongaon and Jessore; and (c) the Chittagong Trunk Road connecting Daudkandi, Comilla and Chittagong. Together with these three trunk roads, there was another significant road bifurcating from the Darjeeling Trunk Road at Dinajpur and going up to the brahmaputra river.

By 1880-81, it became apparent that certain new considerations were strongly emerging with regard to road policies of the government. The consolidation of administration by projecting the arms of law and order into inaccessible parts of the region was fast becoming an imperative for the colonial rulers due to repeated tribal and peasant unrest. The length of road communication maintained by the public authorities in Bengal in 1990 is shown in a table.

In 1934, Mr A J King was appointed special officer for road development projects and was directed to prepare a road plan. He was asked to develop the programme in consideration of the drainage conditions and of the growth and diversification of traffic so that road construction might not lead to water-logging and traffic congestion. He was also asked to pay special attention to the construction and improvement of roads that would act as feeders to any existing metalled or trunk roads, railway stations, large towns and important bazaars and huts. Competition with railways was to be avoided as far as practicable. The majority of those roads were unsuitable to meet the needs of existing traffic and for providing a means by which uninterrupted communication could be maintained throughout the year even by country carts. The factors responsible for such bad condition of roads included poor quality of the soils with which these roads were constructed, gaps on the roads created by rivers having no bridges over them, inundation of the roads during the rainy season, and lack of proper maintenance. 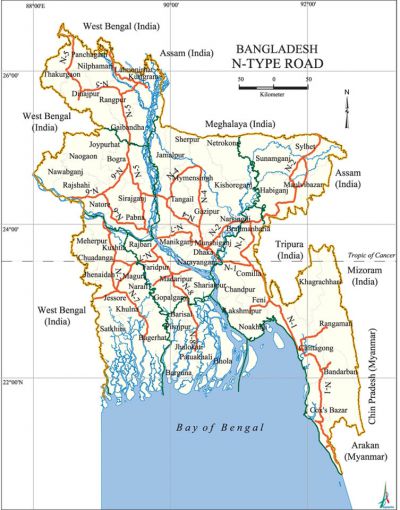 After the end of colonial rule, roads and highways development did not get much impetus until 1960s. At the time of Partition of Bengal in 1947, East Pakistan inherited only about 480 km of metalled road of good quality. The 56.32-km long Sylhet-Tamabil road was the most prominent among such roads. The total length of unmetalled roads in East Pakistan at that time was 3,600 km. PWD, District Boards and Union Boards used to construct and maintain roads, culverts and bridges. Development of road network was accelerated in the early 1960s when road construction begun systematically to connect district headquarters with the capital city of Dhaka.

After the independence of Bangladesh in 1971, road transportation emerged as the most important mode of communication. War-ravaged roads, culverts and bridges were reconstructed fast. Some new bridges on the national highways were built. All the district headquarters were connected with the national highway network. Transportation business became a thrust sector involving thousands of employees and workers.

A large number of different agencies are involved in planning the development of road transportation, management of the traffic and maintenance of roads and highways. The Ministry of Communication is the highest regulatory and policy making body of the government in the sector. The Roads and Highways Department is responsible for construction, re-construction and maintenance of national highways, regional and feeder roads. City development authorities like rajuk, Chittagong Development Authority, Khulna Development Authority and Rajshahi Development Authority, District councils and local government bodies are responsible for the development of roads in their respective areas. City corporations and municipalities maintain transportation infrastructures in cities and urban areas and issue license to rickshaws. Police controls the traffic. Bangladesh Road Transport Authority (BRTA) issues license for motorised transports and also the route permit to passenger buses. Bangladesh Road Transport Corporation (BRTC) operates state-owned buses and goods carriers and it manages the Rupantarito Prakritic Gas Company Ltd (RPGCL) to provide compressed natural gas as fuel for automobiles. Dhaka Transport Coordination Board (DTCB) is entrusted to develop a public transport system in the capital.

The Local Government Engineering Department (LGED) under the Ministry of Local Government and Rural Development is entrusted with the construction of smaller feeder roads connecting growth centres, villages and thana headquarters. Total length of road network constructed by LEGD is about 149,167 km consisting of 14,393 km of Type B feeder road and three types of rural road R1, R2 and R3, respectively of lengths 37,827 km, 49,538 km and 47,409 km. Generally, the overall road network is considered as good, but condition is poor and does not satisfactorily meet the traffic demand. Sub-grades are often of poor quality, most embankments are inadequately compacted and the pavements are sensitive to moisture content. Growth of road network across flood plains of rivers has created drainage problems. Consequently, due to impeded drainage duration and depth of floods tend to be prolonged. Roads in deeply flooded areas experience wave erosion and near rivers are affected by river erosion.

During the fifth Five-Year Plan period (1997-2002), a total of Tk 63.20 billion was allocated for communication sector. The government constructed the Rupsha bridge in Khulna, the Pakshi bridge over the river Padma and a bridge over the river meghna at Bhairab. With the assistance from development partners, the following roads have been improved; the Dhaka-Chittagong-Cox's Bazar highway, the Cox's Bazar-Teknaf marine drive, the Sylhet-Jafflong highway and the Bhola-Barisal-Laksmipur highway.

BRTC, the government organisation responsible for public transportation, has 1116 buses and 140 trucks now (2012). It had been a losing concern until 2000 and still it is a losing concern. It had a fleet of 273 vehicles in 2000 to provide daily transportation service to 84,000 passengers. In 2001, BRTC's 561 buses including a good number of double-deckers carried 300,000 passengers daily and the operating profit in the year was Tk 167.01 million. The number of BRTC's city service buses and inter district luxury coach service and town service in private sector have significantly increased following the renovation and expansion of roads and highways. The city transportation service however, remained poor. For example, in 2001 there are 1700 city transport buses in public and private sector while the estimated requirement was at least 5,000. The total numbers of transports in Dhaka was 650,000, of which motorised vehicles were 250,000 and the rests were rickshaws. By 2012, the situation has further worsened in all cities and towns with the increase of urban population and vehicles resulting serious traffic jam everywhere.

Sixty five percent dwellers of Dhaka city do not avail of any transport, but for them, there is only 220 km of footpath. 35% of the city dwellers use transport and of them 27% use bus, 35% use rickshaws, 15% use auto-rickshaws and auto-tempo and only 11% use private cars. At present, the capital has only 436 km of 4 lane roads and 1,408 km of 2-lane roads. The city has only 8% of its surface area (2230 km) covered with roads and lanes while a smooth traffic system needs roads and lanes on 25% of any city's surface area. [Muhammad Fazlul Bari and Mahbubul Alam]