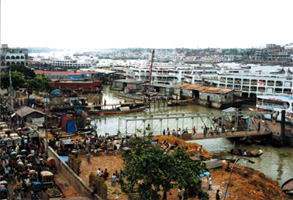 Sadarghat a large ghat or wharf at Dhaka city's approach to the river buriganga. It stands a little left in front of the ahsan manzil. Sadarghat is also the central point of the buckland bund. Originally, it was built as a place for landing of boats, launches and even ships coming to Dhaka from other places. Large vessels can no longer use it because of shoaling up of the river bed entry and an overall downsizing of the navigational capacity of the inland waterways. In the 1820s, the offices of the Magistrate and Collector and many other offices gradually moved eastwards to the areas near the Sadarghat and the localities north of it grew up as the new city centre.

There were only two main roads, one running from west to east and other south to north, meeting almost at right angles near Sadarghat. A labyrinth of lanes branched off from here into the mahallas (city sectors).

Today, hundreds of boats and launches arrive at and depart from Sadarghat facilitating communication mostly with the southern districts. Barges carrying cargoes also use Sadarghat as a point of landing and departure. Sadarghat has become a large everyday market for fruits, vegetables and sundry articles. There is also a terminal for steamers that carry passengers to distant destinations such as Khulna. Many spots of Dhaka city are connected with Sadarghat by a road parallel to the river and on either side of the road are seen innumerable wholesale shops. [S M Mahfuzur Rahman]