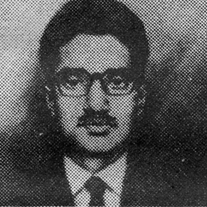 Samaddar, Sukharanjan (1938-1971) educationist, martyr intellectual. He was born on 15 January 1938 at village Eluhar in Banaripara upazila of Barisal district. His father was Kartik Chandra Samaddar. He passed Matriculation examination in 1952 from Baishhari High School and Intermediate from Barisal BM College in 1954. He obtained his BA (Hons) degree in Sanskrit from Calcutta University in 1957. He got his MA degree in Sanskrit from Dhaka University in 1958.

Sukharanjan Samaddar started his career as Professor of Sanskrit in Gopalganj College in 1958. He was appointed as Lecturer in the Department of Sanskrit in Rajshahi University in 1959. Sukharanjan was a man of liberal thought and was non- communal. He had reputation as a singer of Nazrul song and Tagore song.

On 14 April 1971 the Pak army abducted him from his residence on a jeep. Thereafter he could not be traced.  [Mohammad Faiquzzaman]