Sampan is a fat bottomed wooden boat built on an easy curved keel line having a prominent sharp rising head, called anni. Its stern is shaped almost like the English alphabet U, and introduced devotedly as Canda Devi (moon goddess) by the master carpenter. It is propelled by a pair of halish (sculls) by a single sculler - who can also simultaneously steer the rudder. In favourable wind it runs with a hoisted sar (sail) spread with the help of one vertical and another horizontal poles known as dole. Power driven Sampans are also seen now a day on the river calling itself 'Tempo'. During rainy season or hot summer a small pong (thatched shelter) can be pitched on board to provide cover to the passenger and/or goods. The Sampans throng around the ghats (embarkation platforms or places) for picking sawaris (passengers) and the manjhi (sculler) normally shouts his destination, repeating the place-name twice. A Sampan can also be hired for personal or group journey after negotiating fare with the manjhi. The manjhi chants the name of Badr (the guardian saint of the city of Chittagong and the seafarers) when leaving the ghat. A sampan takes 10 to 12 minutes to cross Karnafully River at Patharghata point. 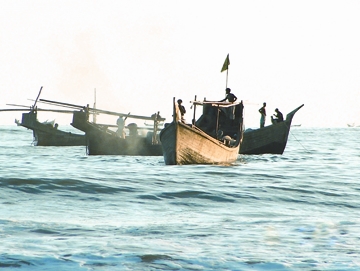 Sampan is a Cantonese word, which literally means 'three planks', and originated from the words sam (three) and pan (plank). The hull of a Chinese sampan is consists of a flat bottom made from a single plank joined with two side planks. But a Chittagonian sampan does not have three whole planks; instead narrow wood straps are used in its construction. Some elements of Chittagonian are similar in design to that of a Chinese Sampan, specifically, the hull, the stern and the thatched shelter. The distinctive Chittagonian features are: the rising head (anni), the sculls (halish) and the triangular sail (sar). The rural residents of Bangladesh, Myanmar, Malaysia, Indonesia, Vietnam, China and Japan particularly use sampans. As a means of mass-transportation Sampan has a profound association with the folklore of Chittagong. The basic shape of the monogram of University of Chittagong is drawn from a sampan seen from the back.

Sampan can be made from various kind of woods, viz., Pitraj, Gamari, Jam, Garjan, Phool Karai and Hinyari. Local carpenters of some riverside villages are associated with the trade of making Sampan. The known sites on the bank of Karnafully river are: Char Pathar Ghata, Old Bridge Ghat, Totar Ba'r Hat, Char Isa Hat, Sikalbaha, Dighir Para and Kalar Para. Various sizes of Sampan play on the rivers and canals of Chittagong dictated by its use. Little Sampans carry short distance passengers and these are usually 3.66 to 4.27m long. A large sampan (8.53 to 9.14m long) can carry 20 to 25 people or 120 maunds of goods on board. According to a master carpenter an ideal sampan must be 6.09m long, 1.61m in breadth and 0.85m in height. [Shamsul Hossain]