Sandpiper (chapakhi) lightly built with relatively long legs, and long and slender bills; camouflaged waders of the family Scolopacidae, order Ciconiiformes. The tip of the bill is extremely sensitive and used to probe the sand and mud for food. Their plumage is dull, usually streaked brown or grey above and buff with streaks or spots below. Most bills seem designed to exploit part of the range of organisms in the mud and sand of the birds' winter quarters. On rich mudflats large flocks can feed together, and may move and maneuver in close rapid flight. The breeding grounds, ie the Northern Hemisphere, may not seem ideal for the adults' bill-shapes, but they have abundant insects that soon become food for the short-billed young. The open areas used by many for nesting encourage aerial displays, which are accompanied by the musical piping calls typical of these birds. The eggs, usually three or four, are often laid in bare scrapes (no nest material is carried). Three species of sandpipers do not nest on ground. The Solitary Sandpiper of the New World, and the Green and Wood Sandpipers of the Old World usually use abandoned nests of other birds, and nest in trees. Twelve species of sandpipers occur worldwide; in Bangladesh there are eight, all are migratory. 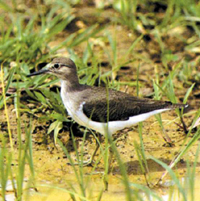 Sandpipers of Bangladesh are: Cha-pakhi (Common Sandpiper, Actitis hypoleucos): Greyish olive-brown above, white below with pale dusky breast and a few dark streaks on foreneck. In flight the brown rump and tail distinguish it from the Spotted Sandpiper. A prominent wing bar is usually present. Sexes alike; Curlew Sandpiper (Calidris ferruginea): Larger size, longer legs; downcurved but slender bill are diagnostic. Greyish brown above with a fine dark mottling; breast white with brown below. In flight white upper tail-coverts are visible. In summer the plumage become chestnut; Spoon-billed Sandpiper (Calidris pygmeus): It has a unique spatula-shaped bill. In winter the bird is largely white, with greyish brown upperparts (including crown). Rump and upper tail-coverts dark brown in the middle, white at sides.